A 21-year-old man has been sentenced to five years in prison in connection with a 2017 impaired driving crash in East Gwillimbury that left a 28-year-old father dead.

The sentence, which also includes an eight-year driving ban after release, was handed down to Tyler Nielsen in a Newmarket courtroom on Thursday.

Nielsen got behind the wheel of his step-father’s vehicle on Nov. 13, 2017 after he had consumed alcohol, marijuana, lorazepam and temazepam

He was travelling at a rate of speed of at least 200 km/h when he veered into the wrong side of the road on Highway 48 near Davis Drive, slamming into a vehicle operated by Stuart Ellis.

Stuart Ellis was heading south when the northbound vehicle struck him head-on. He was pronounced dead at the scene.

On that morning, Nielsen was not supposed to be driving as he was under probation after being previously charged with impaired driving. In that case, he was convicted of careless driving.

Nielsen pleaded guilty to criminal negligence in connection with the crash that left Stuart Ellis dead in January of this year.

Justine Ellis said that her husband, an electrician, was on his way to work at the time of the collision.

The couple had a 14-month-old child together at the time of the crash and found out they were expecting a second child two weeks prior.

“I’m still going home to no husband,” she said while holding back tears as she left the Newmarket courthouse on Thursday. “It’s just another day for me, trying to struggle through.”

“My kids don’t have their dad. None of this brings him back, so there’s no happy ending in this.”

Speaking to the judge in the courtroom, Nielsen’s lawyer described his 21-year-old client as a troubled young man.

Defence lawyer Sheldon Wisener told the courtroom that Nielsen has a long history of depression, anxiety and panic attacks. Wisener said his client has tried to take his own life five times.

“This is a kid who was spiraling for a long time,” Wisener said. “He wasn’t able to cope with the challenges of life and turned to self-medicating. It’s sad and the events were terrible.”

Inside the courtroom, Nielsen looked directly at the Ellis family and apologized.

“I am so sorry,” he said. “The worst part about this whole accident is that I took a father away from his children. I will never be able to forget that. I am deeply sorry for my actions and I am ready to accept the court’s punishment.”

Justine Ellis said the sentence handed down on Thursday was not enough.

“It’s pretty devastating to hear that your husband’s life is only worth five years,” she said. “Something needs to change. I was hoping it would start here, but it’s not.”

Speaking with CTV News Toronto after the crash in November 2017, Justine Ellis said she wants to remind people to not drink and drive.

“I don’t want my husband to have died for no reason,” she said at the time. “I don’t want anyone else to have to go through this. If I can even save one life that means that my husband’s life meant something. I wouldn’t wish this on my worst enemy so if I can save someone else from feeling this pain then I really want to.”

Tyler Neilsen is seen leaving the Newmarket courthouse on March 21, 2019.

Justine and Stuart Ellis are seen with their child in this undated photo provided by family.

Stuart Ellis is seen in this undated photo with his wife and child. (Facebook) 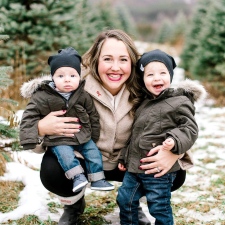