A 49-year-old man has been charged with impaired driving after a vehicle crashed into a hydro box in front of a Richmond Hill home Thursday night.

Emergency crews were called to the area of Yonge Street and Gamble Road around 9 p.m. after receiving a call from a concerned citizen about the crash.

In an audio recording of the phone call, the citizen identified themselves as a neighbor and said they saw the vehicle crash into the electrical box.

“Someone’s car just went right into it and onto their lawn and power went out all over here. And the person that was in the car ran away,” the person can be heard saying. 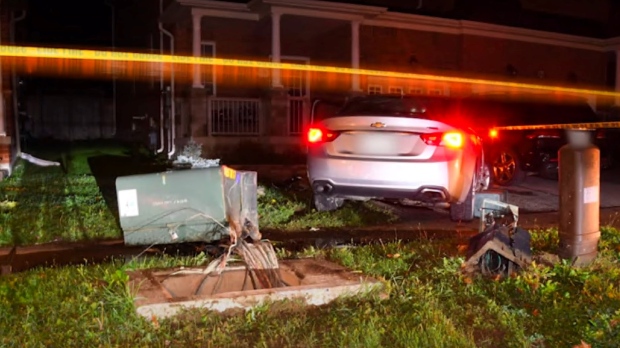 York Regional Police said that officers set up a perimeter in the area and with the assistance of the canine unit and their Air2 helicopter were able to find a suspect.

In video released by police, an officer can be heard relaying information from the helicopter about a person walking on a trail in a ravine east of the scene.

“This person keeps ducking off the trail system for a brief bit of time here and there,” the officer is heard saying.

The video then shows three officers and a police dog taking a suspect into custody.

“After a brief search, the accused was located in a ravine near the scene of the collision,” police said in a news release issued on Friday.

Watch as this impaired driver is tracked down in Richmond Hill by officers in the @YRP Canine Unit and our helicopter Air2 after fleeing from a single-vehicle collision. More details as this link --> https://t.co/ZQgax4u5SL pic.twitter.com/3PFaXN7uf5

The suspect, identified by police as a 49-year-old man from Richmond Hill, has been charged with impaired operation of a vehicle, dangerous operation of a motor vehicle and failing to remain at the scene.

His driver’s licence has also been suspended.

More than 1,300 criminal charges have been laid.