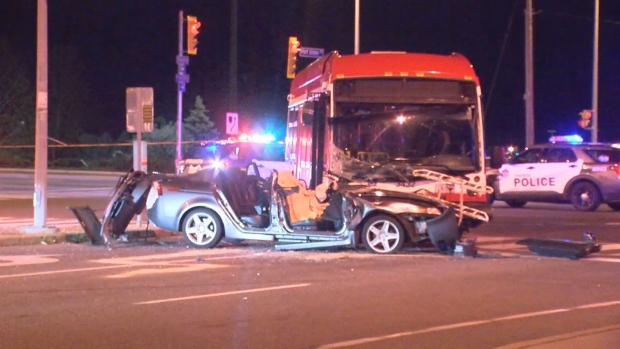 Emergency crews attend the scene of a fatal collision involving a car and a TTC bus on July 4, 2021. (Peter Mills)

A 23-year-old man has died after an early morning collision in Scarborough involving a car and a TTC bus Sunday.

The incident occurred around 1:40 a.m. near Kingston and Port Union roads.

Police allege a driver of an Acura entered the intersection on a red traffic signal while travelling westbound on Kingston Road and collided with the bus.

The driver of the vehicle was pronounced dead at the scene.

The 61-year-old operator of the TTC was transported to a hospital with non life-threatening injuries, police said. No passengers were aboard the bus at the time of the crash.

Roads in the area were closed for a few hours while investigators were on scene.

Police are asking anyone with information to contact investigators at 416-808-1900 or reach out to Crime Stoppers anonymously.