One person is in hospital following a single-vehicle crash in Downsview.

It happened on Keele Street north of Wilson Avenue at around 1:30 p.m.

According to police, the vehicle struck a hydro pole and rolled, coming to rest on top of a second parked vehicle.

Wires were down in the area as a result, Toronto EMS said.

One patient, described by paramedics as an elderly man, was extricated from the vehicle and transported to hospital with serious to life-threatening injuries.

Keele Street was closed in both directions from Wilson Avenue to Calvington Drive for several hours. It reopened shortly before 9 p.m. 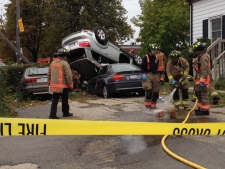 A vehicle is seen resting atop another following a crash in Toronto's Downsview neighbourhood on Wednesday, Oct. 21, 2015. (CTV/Ted Brooks)