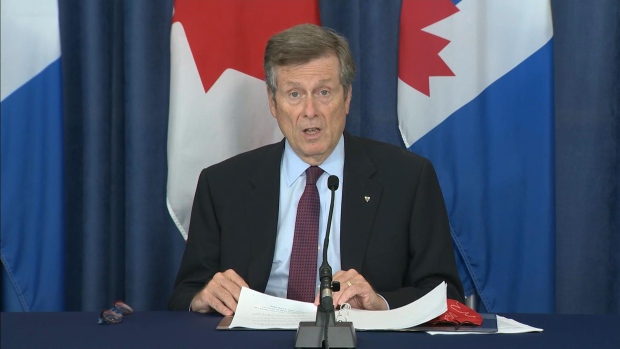 Mayor John Tory says he hopes residents who are calling for a ban against evictions don’t protest outside of his downtown condominium building again tomorrow.

Tory spoke with CP24 today ahead of a planned protest tomorrow outside of his home Yorkville home near Bloor Street and Bedford Road.

The mayor reiterated that he has no power in banning evictions and that the issue is a provincial matter, as he does not have any control over the provincial Residential Tenancies Act.

“My authority, even during the emergency, only extends to things the city council itself could do during times when it is meeting,” Tory said. “I don’t have some magical powers, I wish sometimes that I did.”

The group of Toronto tenants issued a press release last week saying they have a protest planned outside of Tory’s home tomorrow at 1 p.m.

This comes after a protest outside of Tory’s home earlier this month and a demonstration at a ground-breaking ceremony the mayor participated in last week.

Tory said his neighbours felt afraid after protesters reportedly tried to force their way inside his building in an attempt to hand-deliver a letter to Tory’s unit.

“Last time they tried to storm the building,” Tory said. I don’t know what will happen this time, I hope nothing happens. I hope they will decide this is not the right place to do this.”

Tory said he will not be at home at the time of tomorrow’s planned protest and will instead be at city hall participating in a virtual city council meeting.

He suggested that the group could protest outside of city hall if they wanted to.

“We have to proceed forward with all the business we’re doing and it’s a free country, thank goodness, where they can protest if they wish,” Tory said.

The concerned tenants are protesting against Bill 184 which was recently passed by the provincial government. They say the bill would provide unfair advantage to landlords and weaken tenants’ rights making it easier to evict them.

The bill allows landlords to draw up private repayment agreements with tenants who are behind on rent.

“Tory has offered only excuses for his inaction in the face of potential mass evictions across Toronto,” Bryan Doherty of Keep Your Rent said in a press release. “With months of disappearing jobs, COVID infection and death, and the spread of homeless encampments, the Mayor claiming he has no power to intervene on this crisis, with the re-opening of the Landlord and Tenant Board only weeks away, is reckless.”

Tory has previously said he does not agree with the bill.

He also said that the city solicitor will be reporting directly to council on the possibility of legally challenging certain provisions of the bill.

Residential evictions are currently on hold in Ontario amid the pandemic.