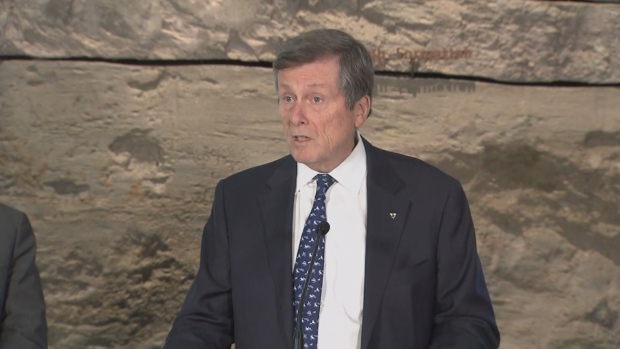 Mayor John Tory held a press conference at Evergreen Brickworks on Thursday morning to detail an implementation plan for the ravine strategy, which was first passed in late 2017.

The plan, which will be considered by Tory’s executive committee next week, calls for the city to begin investing an additional $1.2 million in “ravine litter collection and invasive species control” in 2021 with the level of new funding rising to $2.7 million annually by 2024.

Tory, however, told reporters on Thursday that he will push to have some of that money included in the 2020 budget so that the city “can begin a major cleanup of the ravines” as soon as this summer.

“I do think there is an under appreciation for these ravines and just how special these are. You know these are world respected natural assets that we have in the City of Toronto and they are a remarkable part of our city landscape but when you sort of walk through them or go by them you can sort of take them for granted,” Tory told reporters.

The implementation plan notes that about 10 per cent of the 179 species found in the city’s ravine network are invasive species.

It also reveals that there has been a significant increase in invasive tree and shrub cover over the last decade, mostly as a result of the spread of the invasive buckthorn which went from 1.8 per cent of the shrub layer of the city’s urban forest in 2008 to five per cent in 2018.

It would also allow staff to boost volunteer engagement numbers by 10 to 20 percent and partner with more groups dedicated to protecting the ravines, the report notes.

“Some of the natural growths are just very threatening of the environment, so you have to step up and take action and that is why I am happy to say that after years of talk we have a plan, we have an implementation plan and we are moving forward this year to begin to deal with this,” Tory said. “That is what people I think really expect. Whatever went on in the past went on in the past but going forward we are going to fund it and we are going to do it.”

In addition to the new funding for invasive species management and littler pickup, the plan also calls for an additional $104.9 million capital investment in maintaining the ravines over the next decade. That money would be in addition to the $460 million already set aside in the staff-recommended budget.

The plan also suggests launching a philanthropic fundraising campaign to raise money for further initiatives including an 81 kilometre multi-use “loop trail” that would connect five ravine priority areas across the city.

Tory also said that he has spoken with representatives from other levels of government about the trail project, which he said would carry a price tag in excess of $100 million.

“We are putting up $500 million of Toronto taxpayer money to build all this out but we need their help,” he said.