Toronto’s city council hasn’t decided whether to roll the dice on a casino, but that isn’t stopping one of the world’s largest gaming companies from holding a job fair-style event in the city.

MGM Resorts International, one of several companies vying to open a gaming, hotel and entertainment complex in Toronto, is holding a “career showcase” on Saturday, as it lobbies city council members and tries to gain public support for its proposal to build a venue at Exhibition Place.

Before taking questions from an audience, Randy Morton, president and chief operating officer of the MGM-owned Bellagio hotel and casino in Las Vegas, downplayed the notion that MGM is getting ahead of itself.

“We’re very encouraged by the arrival and the energy and the interest and the excitement, and our team here is very excited to meet everyone who wants to come today,” Morton said after a few dozen people walked through the doors at the start of the event.

Alan Feldman, MGM's senior vice-president of public affairs, said the proposed complex, which the company is calling an “integrated resort,” would create thousands of jobs with an average annual salary of $60,000.

Feldman said MGM would use a “hire local first” approach.

The purpose of the “career showcase” is not for people to drop off resumes, but to give locals a chance to speak to MGM representatives and others about the job opportunities that would exist, Feldman told CP24 reporter Jackie Crandles.

“It really is so much more than a casino,” Feldman said.

Feldman said most of the jobs would be outside of the casino in areas such as food and beverage, information technology, hotel operations, engineering and marketing.

Tim Mooney, who works in Toronto’s service industry, said the venture would create welcome opportunities for people in his line of work.

“When I found out that this was possibly going to be built here I was right away super excited,” Mooney said after speaking to MGM officials. “I find Toronto at times can be a little bit too puritanical and a little bit boring. We need to at least maybe try something different and not be so run by fear and ignorant to the facts.”

Mooney said critics are getting the attention because they are the most outspoken, but he is certain there is more than enough support for a casino complex.

Labour unions, chef Mark McEwan, who is involved in the restaurant side of the proposal, and Cirque du Soleil officials were also on hand at the career event, which was held at Liberty Grand at Exhibition Place.

Carpenters’ Local 27 was one of the labour unions that set up a booth. Local president Mike Yorke told CP24 that he supports the project because of the jobs and revenue it would create for the city.

MGM is holding the event even though city council has not approved a casino and Ontario Lottery and Gaming Corp. has not awarded the rights to one or selected a location.

City council, which appears to be divided on the issue, is expected to vote in May.

Coun. Mike Layton, a casino opponent, attended the information session and was not impressed with what he found.

“I think it’s pretty disingenuous to come in before the decision’s even been made and (promise) people jobs,” Layton told CP24. “That’s not fair to them and I think that shows us who we’re working with here. Casinos are notoriously good at dangling things in front of you and painting a really pretty picture of a jackpot and then never delivering, so I think this is just another one of those of attempts.”

Layton said the turnout was small, and he suggested that is an indication that people are not supportive of the proposal.

Organizers said 700 people had attended the event by 2 p.m.

“This room’s full of casino lobbyists and some folks representing some of the unions,” Layton said. “There’s maybe dozens of people here. Not a lot. Not, I think, what you’d expect because I think the people of the City of Toronto see that these aren’t jobs that will materialize, so they’re not coming down and spending the time.”

Layton predicts Toronto will end up losing jobs if a gaming facility opens here because, he said, smaller businesses would suffer as people spend their disposable income at the casino complex.

Layton pointed to a report by Dr. David McKeown, Toronto’s medical officer of health, who is predicting an increase in problem gambling.

According to the report, shift work and irregular hours would harm the health of casino workers, while an increase in traffic would lead to more injuries and pollution.

The same report could not determine whether a casino would hurt economic development or result in a spike in crime rates.

When MGM unveiled its vision for the complex earlier this month, officials said the facility would create 10,000 permanent full-time jobs, and 4,000 construction workers would be employed during the building phase.

Layton said he has doubts about the job numbers.

MGM’s proposal calls for a three-million square foot complex that would contain 10 restaurants, a 1,200-room hotel, shopping mall, permanent theatre for Cirque du Soleil, and a casino that would occupy eight per cent of the site, according to MGM officials, who are partnering with Cadillac Fairview.

According to the Canadian National Exhibition's board of directors, the complex would have such a large footprint that it would kill off the carnival that is held every summer at the same site.

David Bednar, the CNE's general manager, said the board would oppose any development of that size, be it a casino, bus depot, shopping mall or something else.

“For us it’s not a question of a casino, but three million square feet of new construction right in the middle of our site will be horrendous,” Bednar told CP24 on Saturday. “Anything of that size simply will not leave room for our event.”

The CNE's board passed a resolution to oppose a casino at Exhibition Place, and is threatening to sue MGM and Cadillac Fairview if they continue to use the CNE's trademarked name and images to promote the casino.

Bednar said a cease and desist letter was sent because promotional material using the CNE's name and images suggested that the CNE was involved in or supportive of the project.

Regarding MGM's career session, Bednar said it "smells a little bit like a PR stunt."

In response to critics, MGM maintains its facility would revitalize Exhibition Place and become an integrated part of the area. Drawings of the site plan show the gaming facility and CNE coexisting side-by-side.

The company also says it has plans to address concerns about gridlock.

Construction would cost up to $4 billion, and the complex would take about three years to build, MGM officials said during a presentation March 6.

A number of Las Vegas heavyweights are vying to build in Toronto, but opponents say the potential harm would outweigh the potential benefits.

Critics are also raising doubts about the amount of money a gaming complex would generate for the city, as estimates have varied in the tens of millions of dollars.

On Friday, OLG CEO Rod Phillips said Toronto would receive up to $100 million annually for hosting a casino.

Locations that are currently being considered for Toronto are Exhibition Place, the Port Lands, a downtown site and Woodbine Racetrack. 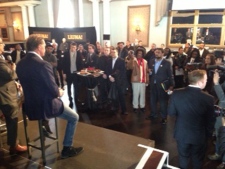