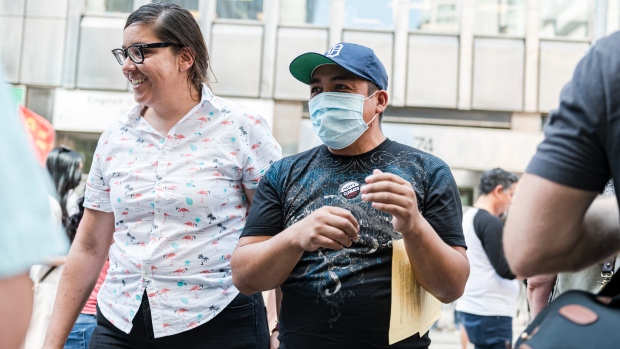 Former worker Gabriel Flores, who was fired by his employer, speaks to a crowd in front of the Immigration and Refugee Board of Canada, in Toronto, on Sunday, Aug., 23, 2020. THE CANADIAN PRESS/Christopher Katsarov

A Mexican worker has been awarded damages after being fired for speaking out about poor working and living conditions during a COVID-19 outbreak at the Ontario farm where he worked.

The Ontario Labour Review Board ordered Scotlynn Sweetpac Growers Inc. to pay $25,000 to Gabriel Flores, who was fired in June by Robert Biddle, who owned the farm at the time, and was immediately sent back to Mexico.

“This confrontation followed Mr. Flores' comments and questions at the meeting the night before where Mr. Flores suggested that the employer should have done more to protect his co-worker and improve the working conditions,” reads the decision from Matthew R. Wilson, alternate chair of the OLRB.

The farm in Norfolk County, Ont., had been gripped by an outbreak of the novel coronavirus, which sickened more than 190 workers -- including Flores -- and killed one.

The worker who died was one of Flores' bunkmates.

The firing came after Biddle showed Flores a video of someone speaking to the media about poor conditions.

“Mr. Biddle accused Mr. Flores of being in the video and then told Mr. Flores that he was being sent back to Mexico in the 'wee hours of the night,”' Wilson said.

Flores denied speaking to the media about farm conditions, but said that he did confront his supervisor about the issues.

“He said the beds were 'one over the other' with poor quality mattresses,” Wilson said. “He testified that the walls of the rooms were not finished nor were they painted. On some nights, he had to sleep on the floor because of the poor condition of the mattress and bed.”

Flores told the board that there was no way for workers to distance from one another.

For its part, Biddle and others from Scotlynn denied that Flores was fired, arguing instead that he quit.

But Wilson rejected that argument, saying there was no documentation to support Flores quitting, and that the company paid for his plane ticket back to Mexico.

Flores' contract states that if he quits, he must pay for his return ticket, Wilson noted in the decision.

The company also pointed out that it offered Flores his job back -- after Flores had filed a complaint with the labour board -- when it said it realized he thought he had been fired.

But Wilson said that made little difference.

“After more than 190 workers had been infected -- including Mr. Flores and one co-worker who succumbed to the virus -- Mr. Flores could not reasonably be expected to return to the workplace and continue living in the bunkhouse without assurances that sufficient health measures had been taken to specifically address the risks of COVID-19,” he wrote. “There is no evidence that the employer had taken any steps to improve the working or living conditions or address the issues raised by Mr. Flores.”

“On the whole, I found the applicant's witnesses (including the applicant, himself) to be more believable. They resisted the temptation of self-serving evidence, were not evasive even when asked difficult questions, and provided a consistent narrative that was more in line with the preponderance of probabilities,” he wrote.