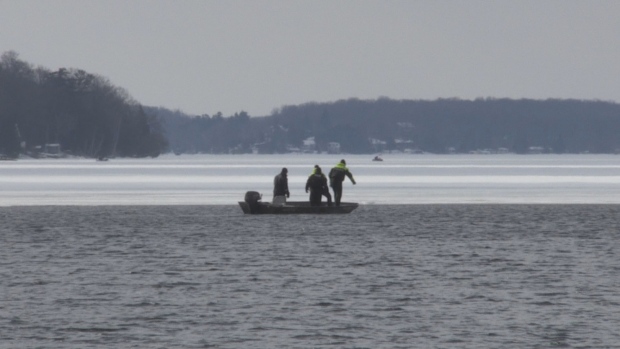 A snowmobiler who fell through the ice on Lake Simcoe Sunday morning was found dead, OPP say.

A snowmobiler who went missing Sunday morning after falling through the ice on Lake Simcoe near Orillia has been found dead.

Emergency crews were called to an area known as The Narrows on Lake Simcoe in the municipality of Ramara at around 4:30 a.m. after reports of two men screaming for help.

The Orillia Detachment of the Ontario Provincial Police said they were able to rescue one of the stranded men. He was taken to a local hospital for treatment.

A search commenced to look for the other man. The OPP Under Water Search and Recovery Unit and an OPP helicopter were called to assist.

On Sunday afternoon, police said the body of the man was recovered from the lake.

The male has been located deceased by the OPP Underwater Search and Recovery Unit. #OrilliaOPP ^mh https://t.co/sycg9d0Lyc pic.twitter.com/Hpa8NyImv9