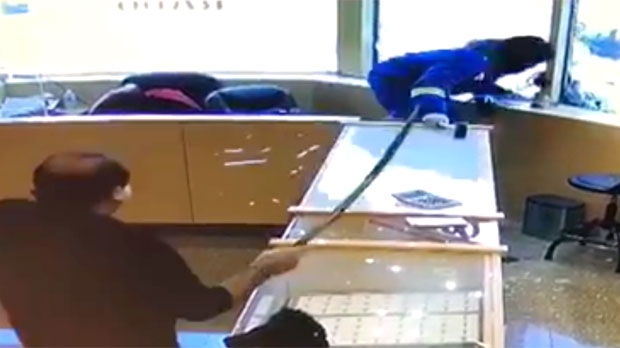 Peel police are investigating a failed robbery attempt at a jewelry store in Mississauga.

Peel police are trying to identify four suspects wanted in connection with a failed robbery attempt at a Mississauga jewelry store.

The incident occurred at around 12:15 p.m. on Wednesday at a store located near Airport Road and Beverley Street.

Video surveillance footage released by police Thursday shows four suspects smashing through two of the store’s windows with a hammer. A suspect then climbs through one of the broken windows but is met by employees who begin swinging what appear to be swords at the suspect.

The suspect retreats back outside the window while another suspect points what appears to be a firearm at the employees. He then tries to enter the store through the window but the employees again fend off the robbers with the swords. The suspects quickly flee to a dark-coloured Dodge Durango and leave the scene.

The first two suspects have been described as five-foot-eight to five-foot-ten with a medium build. They were wearing a blue jump suit with reflective safety decals, a black toque, black shoes, a black hoodie, and were carrying a black backpack.

The third suspect, police say, was between five-foot-nine and five-foot-eleven with a heavy build. He was reportedly wearing a black jacket with the hood up, blue jeans, black shoes, white gloves, and was armed with a black handgun.

The fourth suspect was said to have a slim build and was wearing black pants, white gloves, a black winter jacket with a fur-lined hood and was carrying a black bag.

Anyone with information or dash camera footage of the area at the time of the incident is asked to contact Peel Regional Police or Crime Stoppers.