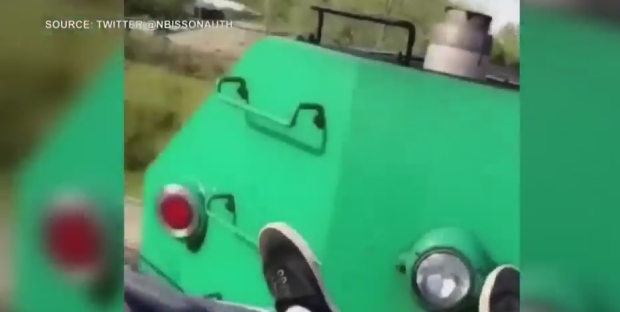 A person is seen riding the roof of a GO train locomotive in an undated screengrab. (Twitter/@NBissonauth)

A 19-year-old Mississauga has been charged after police allegedly tied him to a video posted on social media earlier this month showing someone riding on the roof of a GO train locomotive moving at full speed.

Earlier in September, provincial transit agency Metrolinx said it became aware of a short video circulating on social media showing what they thought was a male riding on the roof of a GO train locomotive, somewhere along the Lakeshore West train line.

They say the video was taken sometime in June 2017.

On Monday, police say they arrested and charged a man they allege climbed to the roof of a train car and filmed his experience.

As he was a youth at the time the incident occurred, his identity cannot be released per the terms of the Youth Criminal Justice Act.

He will appear in court in Brampton at a later time to answer to the charge.

Conduct on railways in Canada is governed by federal legislation and can be punishable with a fine or jail time.

Came across this dangerous, stupid and not to mention illegal stunt. I don’t know what this person was thinking but nothing can justify this. @GOtransit Safety Officers are investigating and take this very seriously. Don’t be like this guy, don’t ever try this. #Toronto #transit pic.twitter.com/4OXQxFhXX2