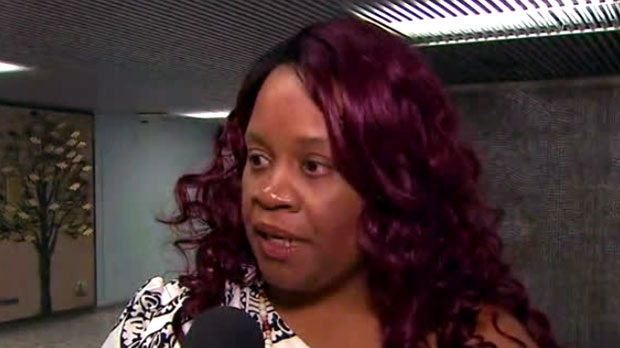 Stacey King, the mother of the victims of a shooting at a Scarborough playground, is seen speaking with CP24.

TORONTO -- The mother of two young girls who were hit by stray bullets at a Toronto playground last month called Monday for better education and community support programs, not increased police presence, to curb gun violence in the city.

Toronto must reduce the number of young people who turn to crime, Stacey King said at a meeting of the city's board of health where ongoing research into community violence was being discussed.

The June 14 shooting that sent King's five and nine-year-old daughters to hospital was just one in a string of high-profile gun crimes this spring and summer that has led to increased calls for the municipal, provincial and federal governments to take action.

Toronto police Chief Mark Saunders announced last week that 200 frontline officers will be added to the night shift over the course of the summer in an effort to deal with gun violence. Officers will not "saturate" certain neighbourhoods, but will be sent where they are needed, Saunders said.

"It's about being focused and strategic in our deployment," he said. "This is not about turning communities upside down. That will never be the intention."

Toronto Mayor John Tory also recently announced that at least part of $15 million earmarked for efforts to curb gun violence would be going to community programs aimed at preventing youth from joining gangs.

Police data shows gun violence has killed 27 people and injured 82 so far in 2018, compared with 17 deaths and 80 injuries at this time last year.

"My kids are suffering from this," King said. "My five-year-old got shot in the stomach ... Do you want to know what she said to me that day? 'Mommy am I going to die?' For a five-year-old to know that, that is so wrong."

Officials need to look at the reasons why some youth pick up guns and others don't, King told the 11 city councillors on the board of health.

Children should be taught about issues that lie at the root of gun violence -- including bullying and mental health -- by Grade 3, King said.

The board of health heard several submissions from support workers and concerned citizens as it considered a progress report on research into community violence.

The research, begun in March, examines the extent to which people who live in the city are exposed to violence and how it affects their mental and physical health, a report by city staff said.

The project will seek out "effective evidence-informed interventions" to mitigate community violence and its health effects. Research findings will be brought to the board of health by late 2019, staff said.