More than 35 pounds of suspected fentanyl, handgun seized in Brampton 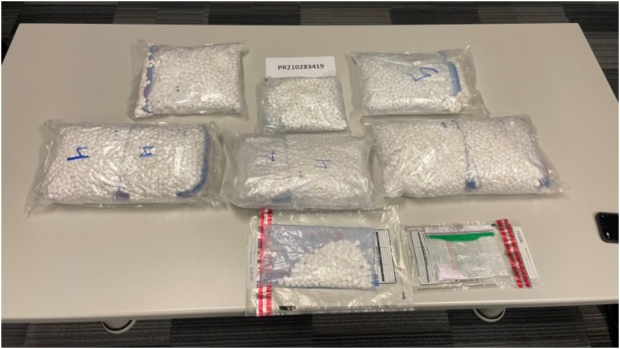 36.4 lbs of suspected fentanyl are seen in this image following the execution of a search warrant at a Brampton residence. (Peel Regional Police)

Peel Regional Police say they have seized more than 35 pounds of suspected fentanyl and a loaded handgun from a residence in Brampton, Ont.

The investigation began following an incident on Wednesday at an undisclosed location at approximately 8 p.m. in which the accused discharged a firearm at an individual, police said.

Police said that as a result of their investigation a search warrant was issued and executed at a Brampton residence.

The accused was arrested and police said they seized a loaded firearm and 16.5 kg or 36.4 lbs of suspected fentanyl.

In a news release issued Friday, images of the handgun and several large bags filled with what appears to be hundreds of suspected fentanyl tablets can be seen.

Yash Arora, 23, of Brampton, is facing a number of charges in connection with the incident, including discharge firearm with intent, two counts of possession for the purpose of trafficking fentanyl and utter threats to cause death.

Arora was held for a bail hearing at a Brampton courthouse on Friday.