Most Canadian parents support continued mask use, other measures in schools: new poll 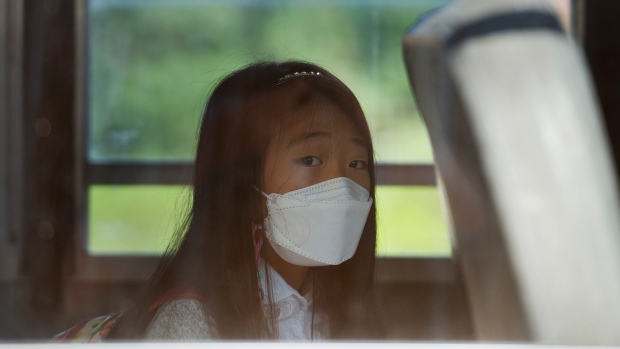 A young girl looks on from a school bus as she arrives for the first day of school in Montreal, Tuesday, August 31, 2021, as the COVID-19 pandemic continues in Canada and around the world. THE CANADIAN PRESS/Graham Hughes

The majority of respondents in a newly released Canada-wide survey say they are concerned about the spread of COVID-19 in schools and want children and staff to wear masks.

The survey by the Canadian Hub for Applied and Social Research at the University of Saskatchewan was done by phone between Sept. 3 and Sept. 28. It asked 1,000 people about any worries in sending kids to school and their thoughts on what public health orders should be in place.

Most respondents (89 per cent) said they were vaccinated. Of those with children 12 and older who are eligible to get a dose, 81 per cent said their kids were also vaccinated.

Parents have been watching closely as children returned to classrooms across the country during the fourth wave of the pandemic.

The survey said respondents were largely confident in the safeguards at their children's schools.

Disano said it was interesting to see that unvaccinated parents were more likely to trust other parents to keep kids home if they are showing symptoms.

“That's aligning with the views of those who are unvaccinated ... that there's a level of person responsibility,” he said.

Many (70 per cent) respondents said they were still concerned about the spread of the virus in schools in their area. Sixty-nine per cent were also concerned about spread at post-secondary institutions.

Researchers said the survey had a 3.1 per cent margin of error, plus or minus, 19 times out of 20 nationally.

There were a handful of protests around mask requirements in schools across the country when children returned to classes last month. The survey found 78 per cent of respondents supported wearing masks in schools.

Quebec and the Prairie provinces were less likely than other regions to support the measure.

Respondents in the Prairies were also less likely to want other public health orders, including restrictions on large public gatherings or the need to isolate if someone tests positive for COVID-19.

Governments in Alberta and Saskatchewan significantly loosened or completely did away with public health orders over the summer. Mask mandates and isolation requirements were removed.

As back-to-school season approached, both provinces experienced surging infections that officials said threatened to overburden hospitals. Unions that represented teachers in the Prairies called for more restrictions in schools and in the community.

“Teachers and school staff are doing everything in their power to protect students in their classrooms, but without consistent, protective measures in place, Saskatchewan children who are too young to be vaccinated will pay the price,” Patrick Maze, president of the Saskatchewan Teachers' Federation, said last month.

Some public health orders were reinstated. Saskatchewan now requires masks in all schools and Alberta requires them for students in Grade 4 and up. That province has also reinstated contact tracing in schools and public reporting of schools with outbreaks.

Survey respondents in Ontario were more likely to want masks in all indoor public places and restrictions on the number of people at businesses.

Disano said there was a lot of variability in people's responses to public health guidelines across Canada.

Respondents in Ontario, Quebec and the Maritimes were more accepting of rules, while in the Prairies they were more likely to support loosened regulations on things including group sizes.

He said he suspects people's level of pandemic exhaustion is also rooted in where they live and current restrictions there.

Those who are tired of restrictions are less supportive of them to begin with, he said. They are more likely to live in provinces where public health orders have been loosened.

“People's opinions and perceptions of those guidelines are reflective of the guidelines in place in their respective regions,” he said.

“It seems the government is generally going with where public opinion lies.”