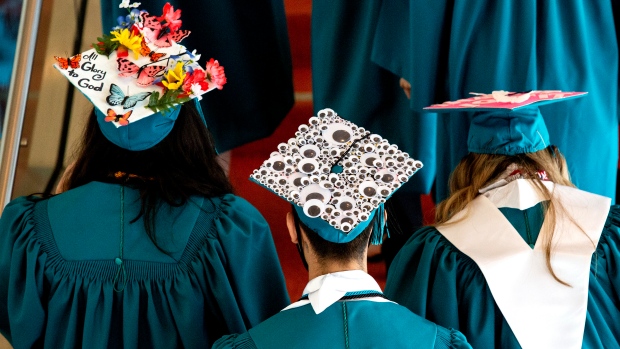 Graduates head towards a staircase for a group photo before the start of their graduation ceremony Thursday, May 27, 2021, in Texas. (Jacob Ford/Odessa American via AP)

Most schools in Toronto will host graduation ceremonies virtually this year, despite a request from Ontario Premier Doug Ford to hold outdoor celebrations for all grade levels so that students can “reconnect outside before the end of the year.”

In the letters, the boards cite numerous reasons for not conducting in-person graduations, including public health concerns as well as the challenges involved in pivoting from previously existing plans.

“We know how important graduation ceremonies are for students, staff and families — especially after such a challenging year where “in-person” memories have been few and far between,” the TDSB said in their letter.

“At the same time, months of planning have already gone into creating virtual graduations for students, costs have already been incurred, and there is very limited time to plan in-person events of this size. We also want to ensure that there is equitable access for students in all communities to such an important event so that we avoid some students getting an in-person ceremony, while others do not.”

The TDSB added that they are exploring possibilities for limited end-of-year activities such as students picking up belongings, dropping off materials or “saying goodbyes,” as long as the in-person events follow the guidance from Toronto Public Health.

TCDSB also cited Ontario’s reopening plan, noting that in Step 1 of the plan, which is set to go into effect around June 14, only 10 people are allowed to gather outdoors.

“Given the information we currently have, Toronto Public Health’s recommendation remains focused on virtual celebrations for graduation,” they said.

In a statement Friday, Toronto Public Health said it does not recommend large indoor or outdoor gatherings. TPH added that virtual celebrations are preferred.

“TPH is awaiting updates to the regulations and guidance from the Ministry of Education about outdoor ceremonies, at which time we will update our guidance accordingly. Virtual ceremonies continue to be the safest choice to prevent the spread of COVID-19,” the statement read.

Earlier this week, while announcing that schools would remain closed to in-person learning for the remainder of the academic term, Ford said that he has asked school boards to allow outdoor graduation ceremonies for all students.

The request, however, surprised school boards, principals and teachers who had been preparing virtual celebrations on the advice of public health officials.

"We are being asked to revert and pivot again, to cancel graduation plans already in place and organize outdoor events amid social distancing restrictions," the Ontario Principals' Council said in a statement on Thursday.

On Friday evening, Premier Doug Ford responded once again to the school boards, saying that his government was “extremely disappointed to hear that some school boards are passing on the opportunity for their students to celebrate safely and in-person with their teachers and friends.”

“We recognize the incredible toll the COVID-19 pandemic has had on Ontario's students across the province. That’s why we are working on the necessary regulatory changes to allow school boards to invite students back for a brief, outdoor, end-of-year celebration to reward them for their hard work during an unprecedented school year,” the statement read.

The government said it would provide logistical help to school boards wanting to hold outdoor ceremonies, but no further details have been released.