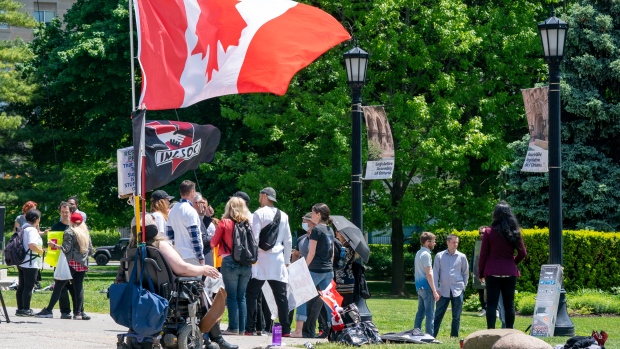 Demontrators protest the pace of Covid-19 reopenings outside the Ontario Legislature in Toronto on Tuesday June 2, 2020. THE CANADIAN PRESS/Frank Gunn

Premier Doug Ford says that he is disappointed with the actions of an independent MPP who briefly joined dozens of protesters outside Queen’s Park on Tuesday as they called for an end to restrictions put into place to limit the spread of COVID-19.

Ontario is continuing to prohibit all organized gatherings of more than five people but on Tuesday afternoon Lanark—Frontenac—Kingston MPP Randy Hillier was briefly seen amid a crowd of approximately 30 as they staged a demonstration against the extension of the province’s state of emergency until the end of June.

The protesters were mostly standing side-by-side in close proximity of one and other and none of them were wearing masks, as public health officials have advised. In fact, one of the organizers of the demonstration was wearing a shirt that read “hugs not masks.”

“I am disappointed in Randy, he should know better. I am just shocked that he would go out there and rally 30 people, it is a shame,” Ford said at a subsequent news conference. “I wouldn’t recommend anyone doing that. We are doing so well as a province. We are seeing the trend go down because of the support of the people and it is just unnecessary. It is so disappointing.”

Protesters have been holding regular demonstrations outside Queen’s Park to rally against the continued lockdown of the province since April.

On Tuesday one of the organizers of the protest, Vladislav Sobolev, told CP24 that hundreds of people have participated without masks and that nobody has gotten sick so far.

Ford, however, has in the past called the protesters a “bunch of yahoos” and has categorized their behaviour as “selfish” and “reckless.”

On Tuesday, he described Hillier’s participation in the rally as “totally irresponsible” and said it goes against “what everybody has been working for.”

Hillier, it should be noted, has been outspoken against the extension of the state of emergency.

In a message posted to Twitter on Monday, he said that Ford has to “learn that democracy isn't a one way street.”