NDP platform would see $33B deficit next year, major tax hikes on wealthy 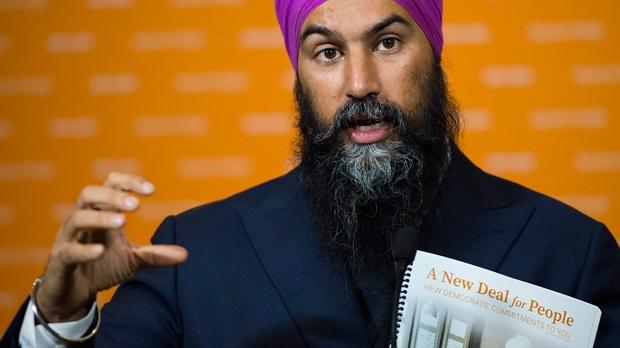 NDP leader Jagmeet Singh answers question from the media during a campaign stop in Ottawa on Friday, October 11, 2019. THE CANADIAN PRESS/Nathan Denette

OTTAWA -- The NDP is proposing to run a deficit of $32.7 billion next year if they win the federal election, with no plan to return to balance.

New Democrats released their platform costing today, and it shows $35 billion in planned new spending next year and $30.5 billion in expected new revenues.

The balance sheet shows many new investments would be front-loaded in the first year of an NDP government, as the projected deficit falls to $18 billion in year two, then sits at around $16.5 billion for the remaining two years of the lookahead.

The party says its plan would still see the country's debt-to-GDP ratio fall over that time period.