Nearly 1,300 City of Toronto workers are either unvaccinated or have refused to disclose status 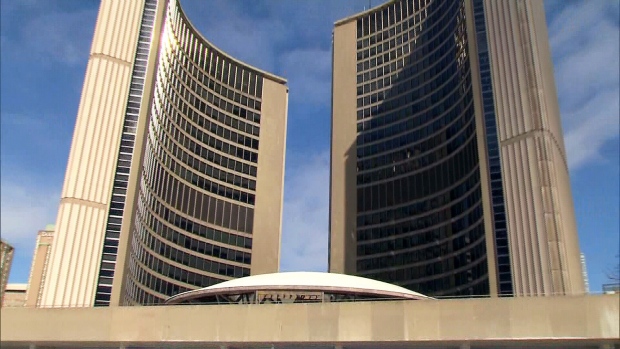 Nearly 1,300 City of Toronto workers are either unvaccinated or have refused to disclose their status and could be put on an unpaid leave as soon as this week.

The city had given its more than 32,000 active employees until this past weekend to be fully vaccinated against COVID-19.

In a news release issued on Monday, the city confirmed that 99 per cent of its entire workforce filled out a disclosure form by the deadline.

It says that about 94 per cent of those individuals – 29,899 employees – have indicated that they are fully vaccinated while another one per cent - 1,064 employees - have received one dose of COVID-19 vaccine and will now be given until the week of Nov. 15 to receive a second dose.

The city says that 408 employees filled out the disclosure form and confirmed that they have not received any doses of COVID-19 vaccine. The remaining 889 employees either failed to fill out the form or did but elected not to disclose their vaccination status.

The city says that staff who are not compliant with the policy will be required to meet with their manager starting this week “and may be suspended for up to six weeks without pay.”

If those individuals do not provide proof that they have received two doses of COVID-19 vaccine by Dec. 13 their employment will then be terminated for cause.

Speaking with reporters during a press conference earlier on Monday, Mayor John Tory said that there are meetings “going on as we speak” with non-compliant employees and he remains hopeful that many of those people “can be persuaded to get vaccinated” without being put on leave.

Tory, however, said that the city is working on contingency plans to ensure services are not interrupted either way.

“We have plans in place to make sure that for the average resident of the City of Toronto that there is very little to no impact on the services they receive from us,” he said. “I think you'd expect us to have those plans in place and we will do the best we can to make sure, as we've done during the pandemic itself, that we provide service to the people in the City of Toronto with whatever circumstances come our way. But we really hope that the number of people who this affects will be a very small number in the end.”

The city had originally given employees until Sept. 20 to disclose their vaccination status.

At that point only 87 per cent of its employees had done so, leaving about 3,500 individuals non-compliant.