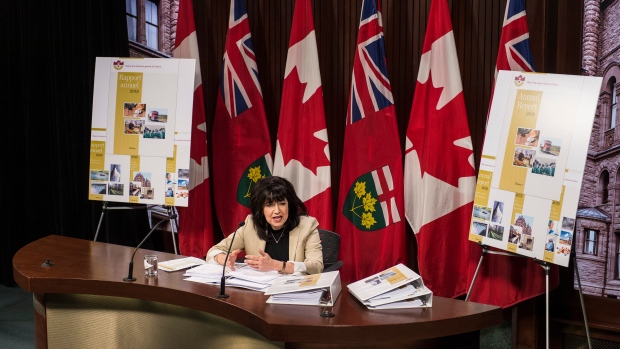 In her 2019 annual report, Bonnie Lysyk said her team's audits of acute-care centres found that six in every 100 patients treated and discharged from provincial hospitals were harmed during care.

“Each year, Ontario hospitals discharge one million people,” Lysyk said. “Of those, about 67,000 people were harmed during their hospital stay.”

The audit found that hospitals are currently not required to report so-called “never-events” - a medical error that should never happen, such as leaving a foreign object inside a patient - to the Ministry of Health.

Lysyk said her team visited six of the 13 hospitals that track “never-events”, and found that 214 such incidents had occurred since 2015.

Ontario's rates of patient harm are the second-highest in the country, after Nova Scotia.

Health Minister Christine Elliott said many hospitals in the province are beginning to report “near-events” to the government.

“This reporting ... is very important so that lessons can be learned and improvement can happen,” she said. “We will continue to work to ensure that all hospitals do report these critical incidents.”

NDP Leader Andrea Horwath said years of underfunding by both Liberal and Conservative governments have contributed to the safety problems.

“Hospital crowding and hallway medicine is going to make this dangerous problem even worse,” she said.

The report found hospitals didn't always comply with required safety practices standards, and nurses who had been repeatedly fired for incompetence were often rehired by other hospitals.

Hospitals and nursing agencies should do more to share information with each other about poor-performing nurses, the report concludes.

Lysyk also found that disciplining doctors can take years and impact a hospital's budget. The auditor found that in one instance, a hospital spent $560,000 and took several years to discipline a doctor who had “practice issues.” The same physician was also facing disciplinary actions at two other hospitals at the same time, which cost those institutions over $1 million.

The report said a physician's legal costs in matters of discipline are effectively paid for by the taxpayer because the government reimburses doctors for their malpractice insurance fees. Lysyk said this means doctors can draw out disciplinary cases for years with little cost to them personally.

The report also probed food and nutrition in long-term care homes and found that it does not always meet quality standards. It often includes too much sugar and salt, and not enough fibre.

“Many (residents) require assistance eating and drinking and rely on long-term-care home staff's help to maintain their health,” Lysyk said.

Residents in three of five homes that the auditor's team inspected were served food that was past its best-before date - one of the homes served liquid whole eggs three months past their best-before date.

The province must provide sufficient procedures to confirm residents, who are among the most vulnerable people in the province, are receiving the nutrition they need, Lysyk said.

The auditor's team also looked at addictions services and found that wait times for treatment, opioid-related emergency department visits and death rates all continue to rise despite increased government funding.

The province does not have adequate policies and procedures in place to deliver timely addictions services, monitor service providers or measure and report on their effectiveness, the report said.

Lysyk also notes that $40 million of the province's $134 million opioid strategy is distributed equally among all regions rather than based on need.

“Ontario has committed to spend $3.8 billion over 10 years to 2026-2027 for mental health and addictions services, so it's important that funding is allocated appropriately to meet the needs of Ontarians,” she said.