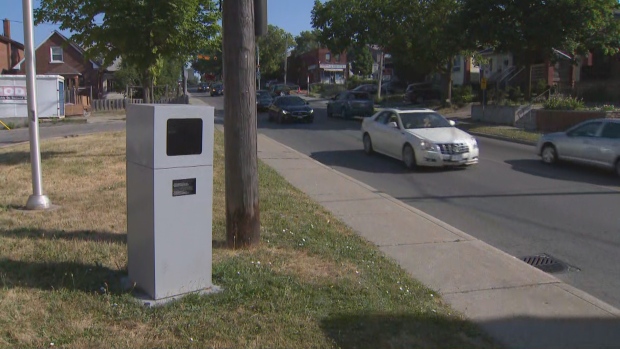 A speed camera is seen in this undated photo.

The city’s speed cameras issued nearly 8,000 tickets during the first two weeks of their enforcement this month.

Fifty Automated Speed Enforcement (ASE) cameras were installed months ago in local, collector and arterial roads in Community Safety Zones near schools to increase road safety and crack down on excessive speeding.

A total of 7,645 tickets were handed out between July 6 and July 20, the city said in a news release. Ticketing was supposed to start in April but was delayed due to the COVID-19 pandemic.

With at least two in each ward, the cameras capture and record images of vehicles travelling above the posted speed limit. Signs in the area have been posted to alert motorists of the cameras’ presence.

The locations, the city said, were chosen based on data indicating where there have been speeding problems in the past.

The city said the camera on Renforth Drive near Lafferty Street issued 890 tickets, the most by any camera, and accounted for 12 per cent of the total number of tickets.

The camera in that area also issued the highest fine of $718 and detected the highest speed, clocking a vehicle at 89 km/h in a 40 km/h zone.

The city said the cameras also recorded 591 repeat offenders during that period, with the most frequent one receiving eight tickets for speeding at Trehorne Drive near Duffield Road.

The total payable fine amount includes a set fine determined by Schedule D under the Provincial Offences Act, a victim fine surcharge and applicable court costs, the city noted, adding that demerit points will not be applied.

The city said the enforcement faced some problems with two cameras issuing 299 erroneous tickets between July 6 and July 15.

The camera on Derrydown Road, which was programmed to monitor for a speed limit of 30 km/h in a 40 km/h zone, issued 277 tickets.

The city noted the vendor mistakenly programmed an incorrect speed limit without their knowledge.

Meanwhile, a camera on Elkhorn Drive was programmed without the city’s knowledge to indicate it was monitoring for the wrong direction of travel, resulting in 22 erroneous tickets.

Those tickets were excluded from the total number.

“City staff and the vendor responded immediately by conducting a thorough investigation to ensure that no other ASE camera was issuing erroneous tickets,” the city said in a statement.

Those who received those erroneous tickets will receive a notice in the mail advising them that the city will be cancelling them.

Residents who already paid those tickets will receive a refund, the city said.

There have also been reports of speed cameras being stolen and damaged.

In June, an 800-pound photo radar speed camera in Parkdale was stolen. Earlier this year, another camera was defaced with spray paint.