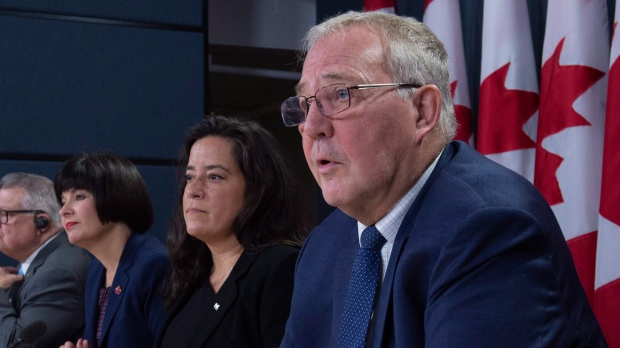 OTTAWA -- The federal government is warning newcomers that stiffer impaired driving and cannabis-related penalties could lead to their removal from Canada.

The measures are part of the sweeping package of changes taking place as Canada becomes the first G7 country to legalize recreational cannabis use.

The Cannabis Act includes penalties of up to 14 years in prison for illegal production or distribution of cannabis and for taking it across the Canadian border. The same maximum penalty applies for giving or selling marijuana to someone under 18 or using a young person to commit a cannabis-related offence.

On Dec. 18, new impaired driving penalties take effect, and the maximum penalties for most of these offences will increase to 10 years from five. It means they will fall under the definition of serious crimes for immigration determination purposes.

"The impact of these new penalties on permanent and temporary residents could be significant," the Immigration Department advises in a statement.

People who work with immigrants and refugees agree that it will make things tougher for newcomers.

"The significance of this change from an immigration point of view is very high," said immigration lawyer Lorne Waldman.

Immigration officials could rule that a person is inadmissible to Canada for "serious criminality," even if an impaired driving offence took place in another country.

Under federal immigration law, a permanent resident or foreign national can be deemed inadmissible if they have been convicted of a Canadian offence punishable by up to 10 years in prison, or of an offence for which they have actually been sentenced to more than six months behind bars.

In addition, the same rule applies to those who have committed an offence in another country that, if committed in Canada, would carry a penalty of up to 10 years.

As a result, the department says, the new cannabis and impaired-driving provisions could mean:

-- Permanent residents might lose their status and have to leave the country;

-- Temporary residents -- including visitors, international students and foreign workers -- may not be able to enter or stay in Canada;

-- Refugee claimants may be ineligible to have their claim referred for a refugee hearing.

Moreover, appeal rights for permanent residents and foreign nationals, including sponsored members of the family class, could also be affected, the department says.

Under the changes, permanent residents convicted of impaired driving in Canada will have to worry about the prospect of deportation proceedings, Waldman said.

Impaired driving is an extremely serious matter given the danger it poses, Waldman said. "But do I think people should be barred from Canada, possibly for life, over one impaired driving (offence)? No."

He cautioned that it remains to be seen how strictly Canadian authorities will apply the removal provision.

Although criminality could always pose a barrier to entering Canada, a serious offence "makes your pathway into Canada much more complicated," Waldman said.

"Because you have to go through a whole series of extra steps and the requirements to get an exemption -- a permit to allow you to come in -- are more stringent."

Even now, Canada doesn't meet its international obligations with respect to refugees, because Canada's exclusions on the basis of serious criminality are much broader than the exclusions in the global refugee convention, said Janet Dench, executive director of the Canadian Council for Refugees.

She said that adding another group of people who will be denied access to a refugee hearing on the basis of serious criminality means Canada is "increasing the risk that we're going to send someone back to face persecution in violation of our international obligations."