Residents in Niagara Region are being asked to keep an eye out for a rare meteorite that was tracked falling from space and crashed in the region over the weekend.

The object lit up the night sky around 3:30 a.m. on Nov. 19, prompting a flood of social media comments.

Many people also described hearing a loud boom or crash, which scientists said was likely a super sonic boom from the object going faster than the speed of sound.

I captured meteor #c8ff042 in Brantford,Ontario Canada at with my GoPro
It was capturing 30sec shots all night and got this shot pic.twitter.com/grTgtPQreU

Dr. Kim Tait, a curator of mineralogy at the Royal Ontario Museum (ROM) said she first heard about a sighting while scrolling through an Oakville moms group on Facebook Saturday morning.

“Some of the moms are like ‘my dog started barking at 2:30 in the morning, and I heard what sounded like thunder. Was there thunder last night?’”

She reached out to a colleague at Western University who operates a camera network which looks for events in the night sky over Southern Ontario.

“He said sure enough there was a meteor that crossed right over,” Tait said.

According to the European Space Agency, the object measured approximately 1 metre across and it was only the sixth time that a global asteroid warning caught an object before it impacted the Earth.

A ‘PUZZLE PIECE’ IN THE COSMIC MYSTERY

While meteors are fairly common, most burn up in the earth’s atmosphere. It's even more rare for an object that makes it all the way to earth without disintegrating to be tracked from space.

“Every once in a while there will be an event where a rock is just big enough or stubborn enough or whatever it is that (it) can make it through our atmosphere and produce material on the ground,” Tait said. “And in this case, the material was large enough that it is expected that there was some material that did make it all the way through, which is great for scientists like us.”

While there are a number of large expensive missions to gather rocks from other planets, Tait said, events like the one on the weekend are essentially freebies.

“What's really exciting about meteors is that they come to us for free and they’re sort of a random sampling of all the rocks in our solar system,” she said.

She points out that many of the rocks are 4 1/2 billion years old, each one a "puzzle piece" to the mystery of how the Earth and other planets came to be.

“These are rocks that are really from the beginning of the solar system, so every rock is really important, and it tells us a little bit more about not only how our planet formed but how the other planets formed and, you know, some of them didn't survive, they were ripped apart.”

Aside from the obvious scientific value, Tait said people do also try to sell meteors and in Canada, a rock that lands on your property from space is yours.

“Even if there was a search party, you would have to get permission from the landowners and it remains theirs if found on private property.”

There's even a market for objects which have been hit by meteors, as well as a special name; “hammers.”

But the most valuable thing about the rocks is the information they hold about the cosmos itself. Tait said she would be happy to speak with anyone who does find a meteor to help walk them through what they’ve found and even to examine it if it turns out to be an actual meteorite. 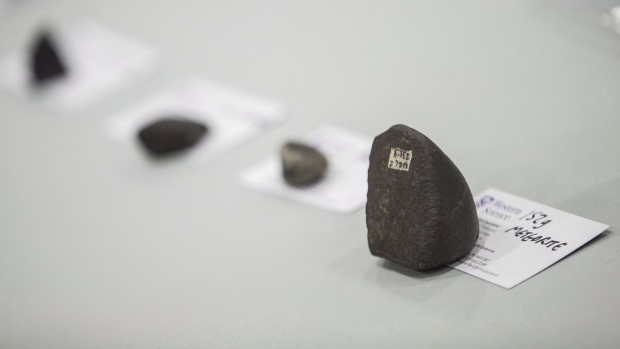 So how do you know if you have found an actual rock that has fallen from space?

“What we look for is a rock that has sort of this black outer surface, and that is because it's literally been burning, has a black glassy surface, and that's called a fusion crust,” Tait said. “So that is sort of a telltale sign for rocks from space. We don't have any like geological processes here on earth that could do that. So that's the first telltale sign, is the visual appearance of the outer surface.

“And then most meteorites are magnetic. So we're looking for even a fridge magnet or anything like that, just to test to see if there's iron in it.”

Now all you have to do is go find it, a task Tait agrees is akin to finding a needle in a haystack.

“It's very, very difficult sometimes to find these things. But, you know, people find them so you never know, right” she said.

That's because while the object was tracked to an area roughly corresponding to Grimsby, it could've fallen anywhere, possibly into water as well.

“The fall zone is so, so large,” she said. “You know, we're just going to have to put it out there to the people in that area, just to kind of keep an eye out. It’s nice days still, if people are maybe out walking the dogs or you know, going for a stroll along the lake and just keep an eye out.” 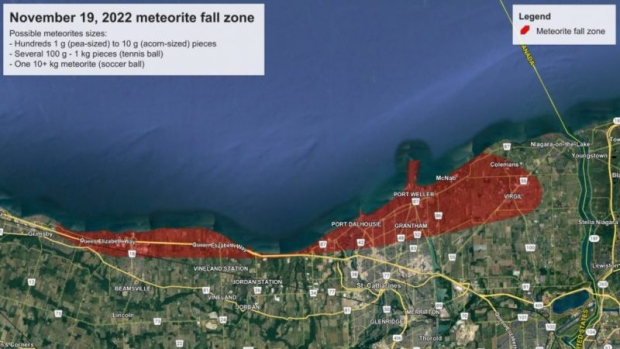 Peter Brown, a member of the Western Meteor Physics Group, told The Canadian Press that the object was about 100,000 kilometres away from the earth when it was first tracked and likely weighed around 500 kilograms when it entered the atmosphere.

He said the group at Western believes small pieces of the meteorite made it to the south shore of Lake Ontario, around Grimsby and Vineland, and larger pieces that could weigh several kilograms landed north of St. Catharines.

Tait said anyone who does find an object which they believe to be the meteor can reach out to the ROM to confirm the find.