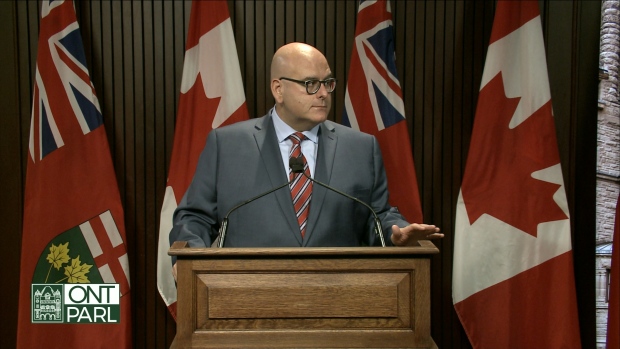 Liberal Leader Steven Del Duca is questioning Premier Doug Ford’s commitment to affordable childcare amid uncertainty over when, and if, Ontario will sign onto the federal government’s $30 billion plan.

Prime Minister Justin Trudeau’s Liberal government has committed to cutting fees in half for licenced non-profit child care spaces by next year before lowering them further to $10 a day by 2026.

Ontario, however, is one of three provinces that is yet to sign a formal agreement with the feds. The others are Alberta and New Brunswick.

Premier Doug Ford said earlier this month that his government has had some “great conversations” with federal officials and wants a deal so long as it is the “right deal.”

But he has not indicated what is holding up negotiations and Monday's throne speech made no references to $10 a day childcare, much to the chagrin of opposition leaders.

“We know that eight provinces and territories have deals in place and working families in this province are wondering why are they being treated differently?” Del Duca said while speaking with reporters following the speech. “Why has Doug Ford not made this a priority? Why has he not made that a clear priority especially given that some of the other places around the country already have deals in place? There is no reason to wait, there is no reason to delay and it is particular discouraging given the lack of content and the empty rhetoric we saw in the speech today.”

Toronto is the most expensive city in Canada for child care with parents paying an average of $1,600 in monthly fees per child.

That means that many parents of younger children in the city and its surrounding suburbs would be in line to save hundreds of dollars a month if Ontario signs onto the program.

On Monday Del Duca was asked whether the government could be looking to negotiate other concessions as part of the child-care deal, such as funding to offset the cost of the province’s junior kindergarten program which involves some early childhood learning aspects.

“It didn’t stop the other eight provinces and territories and these are provinces and territories where the governments wear every political stripe,” he said. “I think fundamentally Doug Ford doesn’t believe in $10 a day licenced childcare and that is not good enough for working families and particularly working moms who have disproportionately bared the brunt of what we have dealt with in this pandemic.”

The Liberal plan was announced during the federal budget in April and British Columbia became the first province to sign on in July.