'Nobody should have to live on this': ODSP recipients on calls to double payments 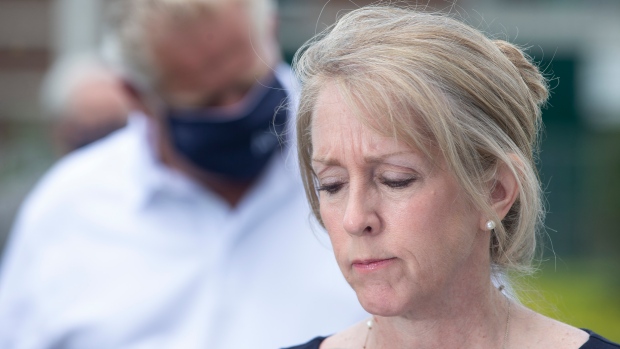 At the beginning of every month, Anne Jensen says she does one big grocery shop, mostly seeking out non-perishable items.

“I can't really eat healthy because food is so expensive, and so I'm buying cheap stuff in bulk that will last me a long time,” Jensen told CTV News Toronto.

By the end of each month, she says there’s very little left, and she’s often stuck reaching for instant noodles or Kraft Dinner come mealtime.

“Some weeks, I hardly have anything to eat leading up to the end of the month,” she said. “I don't have any extra money to go for coffee or dinner – all the things people take for granted that are just normal to them – I can't do any of that.”

Jensen is a recipient of the Ontario Disability Support Program (ODSP). Since 2018, she’s received $1,169 dollars a month from the government, the maximum amount permitted per person.

As a resident of Kitchener, Ont., Jensen says the average one-bedroom rental in her area goes for about $1,600 a month – almost $400 dollars more than her monthly budget.

“How does anybody expect, in 2022, for someone to live on this much money? This would’ve been a livable wage maybe in the 90s,” she said

This week, more than 200 advocacy groups signed an open letter asking the Ontario government to double ODSP payment rates and ensure they keep up with the soaring cost of living.

While campaigning in June’s election, Doug Ford promised to raise ODSP rates by five per cent and introduce legislation to tie annual increases to inflation.

The letter, released Monday by the Income Security Advocacy Centre, said the plan is far from what financial aid recipients need, and the proposal amounts to $58 extra per month for ODSP recipients.

“With continued inflation, and the associated increase in cost of living, five per cent is not nearly enough of a rate increase to survive,” ISAC said. “We call on this government to double both (Ontario Works) and ODSP rates, and to index these rates to inflation.”

Dr. Talveer Mandur, a physician and member of Health Providers Against Poverty, says current ODSP rates are "unliveable," and are pushing people into "unstable living situation and homelessness."

“When ODSP started in 1998, a person with disabilities would receive $930 a month, which would be around $1,467 adjusted for inflation today. The rates have not kept up with inflation though," he said within the letter. "Today that same person receives $1,169."

While Jensen says “anything is helpful,” she also notes “an extra $58 isn’t going to do much for [her].”

“Nobody should have to live on this,” she said. “We need to have a livable income.”

Brad Mortin, a Sauble Beach resident accessing ODSP, pointed out that even a doubling of payment rates would still not bring recipients past Ontario’s stated low-income line.

According to Ontario’s Poverty Reduction Strategy, the deep-poverty threshold, for a one-person household, ranges from $1,310 in rural Ontario to $1,555 in Toronto. The low-income cut off is $38,500 yearly for an indiviudal and $68,500 for a family.

`“Doubling it gets us just to the [low-income] line,” Mortin said, adding that he still advocates for the amount to be doubled.

“It would help me eat healthier,” he said.

Another ODSP recipient, Al Rogers of Guelph said while an extra $58 monthly could cover a bus pass and a few cups of coffee, a doubling of ODSP would make a more meaningful impact on his quality of life

He says he recently had to pay upfront for dental work, costing him $350 and setting him back financially.

"I try to put it a little bit of money away every month, just in case, for these things, he said, adding, in a couple years' time, he'll need a new pair of glasses as well.

"A doubling of our payments would help with that kind of thing."

On Monday, a spokesman for Minister of Social Services Merilee Fullerton reiterated the government's plan for a five per cent raise, calling the increase “the largest in over a decade.”

“Our government will always take care of the most vulnerable, which is why we're increasing ODSP rates by (five per cent),” Sean Forsyth said in a written statement.

Finance Minister Peter Bethlenfalvy was asked earlier this month if the government would give the program a boost larger than five per cent in light of the already high inflation rate. He didn't directly answer, saying the government has many tools to fight the rising cost of living.

As the financial situation for people living with a disability grows more critical, Rogers says the message he wants to get across is ultimately about the stigma attached to that.

“Most people think we're just sitting there, doing nothing and collecting money,” he said. “But 95 per cent of us can’t work at all.”

“For me, personally, I've got diabetes, a heart condition, two bad knees, and a hip that has to be replaced in the next year and a half – I can’t work," he said.