Not falling behind anymore: Canada to surpass U.S. in share of population with one COVID-19 vaccine dose 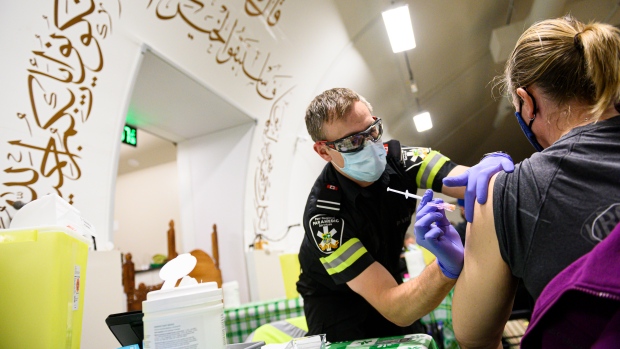 OTTAWA -- Canada is expected to move ahead of the United States today in at least one of the markers in the race to herd immunity against COVID-19.

By the end of the day nearly 49 per cent of all Canadians should have their first dose of a COVID-19 vaccine, pushing slightly ahead of the U.S. at just over 48 per cent.

Canada is set to get one dose to more than half the population before the end of the long weekend, but remains far back of the pack in the full-vaccination race, with fewer than four per cent of Canadians fully immunized.

It is a marked turnaround for Canada, which just one month ago remained well behind the global leaders in overall vaccinations as Canadians looked with vaccine envy to places like the U.S., the United Kingdom, Israel and Chile.

Almost 18 million Canadians have received at least one dose, with an average of about 330,000 new people joining the vaccinated group daily over the last week.

Trevor Tombe, an economics professor at the University of Calgary who is tracking Canada's immunization pace against the rest of the world, says with current vaccination rates Canada is on track to surpass the first-dose share of Chile next week, the United Kingdom in two weeks, and should pull even with Israel by mid-June.

Chief public health officer Dr. Theresa Tam says modelling suggests we need three-quarters of Canadians over 12 to get their first dose and one-fifth to have both doses before provinces can safely loosen outdoor public health restrictions this summer.

Canada should be able to hit those goals by mid-to-late June, says Tombe.

And he notes there are no signs Canada's pace is going to slow any time soon.

“Canada is in this situation where our pace of vaccination is accelerating, past the point where it started to sharply decelerate in the United States,” says Tombe.

The United States' vaccination program peaked around the third week of April, when just over one-third of the population had been vaccinated.

It is now giving out about half as many new doses each day as it was a month ago, and more than half of those are going to people for their second shots.

Canada is still focused on initial vaccinations, with nine in 10 new injections going to first doses.