Notes from the campaign trail: Leaders make final plea in B.C. ahead of election day 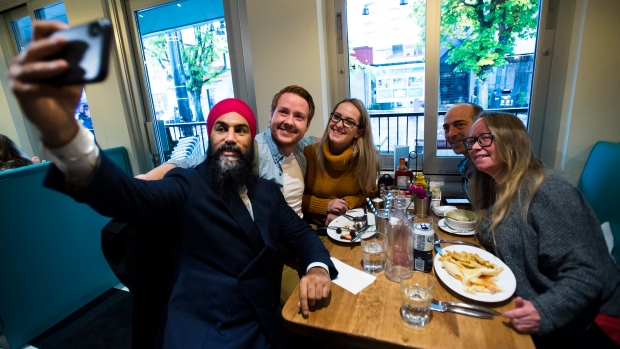 NDP leader Jagmeet Singh poses for a selfie with people in a restaurant in Davie Village during a campaign stop in Vancouver, B.C., on Sunday, October 20, 2019. THE CANADIAN PRESS/Nathan Denette

British Columbia is feeling the election love on the last full day of campaigning for the 2019 election. The three top parties are all spending their last campaign hours in B.C.

A Nanos poll looking at B.C. has the three top parties within four points of each other. The NDP is on top with 29 per cent followed by the Liberals at 27 per cent and the Conservatives at 25 per cent. With a three-point margin of error, this is close to a tie. The Green Party will be a factor as well sitting at 15 per cent in B.C. With four-way races, there will be many close ridings in the province, and it will take a while before some of the races are called. If those numbers hold, it might be a sign that on election night, true political junkies will be up very late waiting for the votes to get counted in those last B.C. ridings.

The national polls remain deadlocked. As the campaign winds down, the only movement is the Liberals and Conservatives have each dropped a little, and the NDP and Bloc Quebecois have both had a bounce. How that translates into seats is what Monday night will be all about.

With a strong advance poll over the Thanksgiving weekend, many will be watching for the turnout on election day. The 2015 election saw 68 per cent turnout. All the parties will be working on getting their vote out. With a deadlocked race, it might well come down to getting voters out to every poll across the country. A strong turnout helped the Liberal Party achieve its majority in 2015.

Conservative leader Andrew Scheer might have been in B.C. Sunday, but he made a play for Quebec votes suggesting that Bloc Quebecois leader, Yves-Francois Blanchet is setting the table for another Quebec referendum. Scheer said Blanchet's "first priority is to work with Parti Quebecois for a referendum." While the three other leaders are on the west coast, Blanchet keeps working the province of Quebec, trying to build support.

The Conservatives sent Scheer into several tight Vancouver races. Scheer's pitch hasn't changed. Again and again, he held out the spectre of a Liberal – NDP coalition saying Canada cannot afford it. Scheer keeps calling for voters to give him a Conservative majority on Monday. At the end of a long day of campaigning, Scheer will fly back to his riding in Saskatchewan to await the results.

Jagmeet Singh has been in British Columbia for the last week. The NDP numbers are rising in the province, and Singh is pumped. He is so pumped that he has taken to doing what he calls the "Jagmeet Jump," and today, he called on voters to do the jump after they vote. It's that kind of fun tactic that is drawing young voters to the Singh campaign.

On a more serious note, Singh again talked about the NDP position if there is a minority government. "I've said I'm open to working with anyone except for the Conservatives, and I don't want to predict what's going to happen, but I can tell Canadians this; if you elect New Democrats, we're going to fight for you," Singh said.

Liberal leader Justin Trudeau might be losing his voice, but he has run hard over the weekend. The Liberals packed Trudeau's day on Saturday with southern Ontario crowds from Niagara to Milton and then stops in Winnipeg and Calgary before flying into Vancouver. Trudeau will have one final rally in Victoria Sunday night before flying back to Montreal to vote in his Montreal riding on Monday.

Political strategists of all stripes are putting their money on a minority government. If the guessers are right, the parties will be forced to plot their strategies to find a workable parliament to govern Canada.