'Nothing has been left to chance:' Revamped city-run summer camps open for nearly 2,500 children 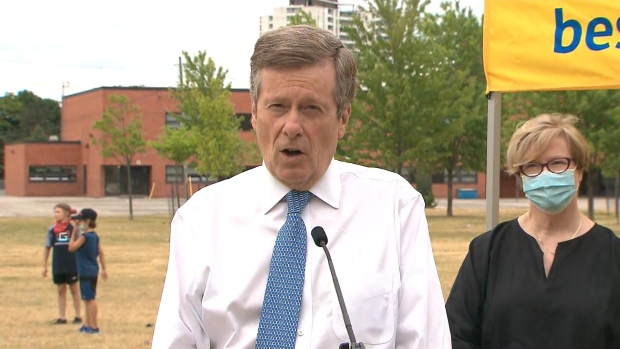 Mayor John Tory speaks at the opening of a CampTO camp at Parkway Forest Community Centre in North York on Monday morning.

Most children have been stuck at home since the COVID-19 pandemic brought an abrupt end to the school year in March but for thousands of them today marks a return to a little bit of normalcy with the opening of city-run summer camps.

The city initially cancelled all of its planned summer camps in May amid concerns about the spread of the virus but it later announced plans for a modified program dubbed “CampTO.”

As part of the program, the city is offering identical day camps for children between the ages of six and 12 at 130 locations across the city.

The day camps will feature all the usual activities, such as sports, arts and crafts and drama and music, but they will also take public health advice into account.

That means there will be smaller groups, daily symptom checks, efforts to ensure physical dispatching where possible, a prohibition on field trips and a pre-camp call to go over the new procedures.

Campers will have to bring two to three clean masks each day and wear them whenever indoors in order to comply with a bylaw that went into effect last week.

“This is a very important day for us. I thought that we were going to maybe be in a position where we just have no camps this summer and that would have been most unfortunate but thanks to the effort of our staff and the cooperation from our medical officer of health and her team we got some camps pulled together and they are not just random camps; they are great camps that are going to be great for kids,” Mayor John Tory told reporters on Monday morning after touring one of the camps at the Parkway Forest Community Centre in North York.

There were already 68,000 registrations for city-run summer camps when the decision was made to cancel them in May.

So far there have been about 16,650 registrations for the new CampTO program, though many of those signed up are participating in multiple one-week camps.

The city says that the number of individual children participating in the program is only about 4,500 so far, with nearly 2,500 of them starting camp today.

“Listening to the gleeful screams and laughter behind me is just music, it is music to our ears and it is a sign that at least children in Toronto can get off their phones and be in a camp playing with each other,” Don Valley North Coun. Shelley Carroll said on Monday morning. “CampTO is a lot about getting kids ready for our new COVID-19 world. It (the virus) is with us for the next several months and kids need to get use to how they can keep themselves safe in a group setting and they can learn that at CampTO while they are having fun. I think it really will make them ready for the school year and whatever that may entail.”

Tory said that only about 70 per cent of the summer camp spots have been filled so far, leaving extra capacity for any parent who wants to sign their child up at the last minute.

The camps all last for one week and will run until mid-August.

“A lot of people I am sure were taking a cautionary approach to this but I can assure you having seen it myself this morning that these camps have taken every possible precaution in close cooperation with the medical officer of health to make sure they are safe,” Tory promised on Monday. “Nothing has been left to chance.”