Of 55 police-involved shootings across Canada in 2020, all but 4 still under investigation 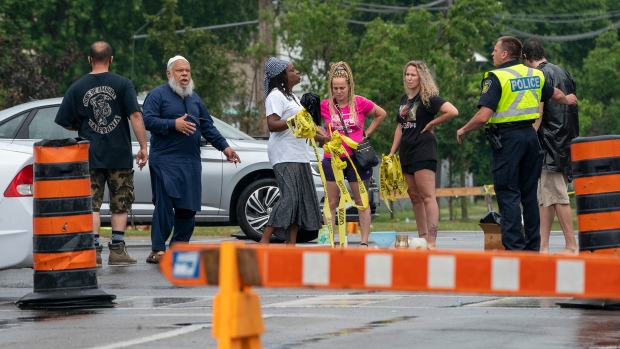 Protesters talk with a police officer at the blockade of a major road intersection in Mississauga, Ontario on Tuesday June 23, 2020. Protesters have been gathering in the intersection near where Ejaz Choudry was shot and killed by police attending a mental health call. THE CANADIAN PRESS/Frank Gunn

Experts say it takes time to properly investigate a police shooting - even when the public is calling for quick results - but details on the outcome must be more transparent.

Of 55 police shootings that resulted in death or injury in Canada in the first 11 months of this year, four investigations were completed by Nov. 30.

One officer was charged.

Ontario's police watchdog charged a Peel Regional Police officer in July in a shooting that injured Chantelle Krupka, a 34-year-old Black woman, on Mother's Day. The officer, who has since resigned, faces charges of criminal negligence causing bodily harm, assault with a weapon and careless use of a firearm.

In mid-November, Nova Scotia's police watchdog ruled the August shooting of a 25-year-old man, who allegedly approached officers while holding a knife, was justified. The man, who was not identified, was injured.

The Independent Investigations Office of British Columbia found in October that officers were justified in the fatal shooting of homeless advocate Barry Shantz in January. Officers had responded to a request for a wellness check that indicated Shantz was armed and suicidal. The investigation found officers negotiated with Shantz for hours before he came out of the house with a shotgun.

In Nunavut, Attachie Ashoona was shot and killed by RCMP in February. The Ottawa Police Service investigated and, in August, said there was no basis for charges. Almost no information about what happened was released. Soon after, the territory announced it plans to create its own civilian police review agency.

Experts say it is common for an investigation into a police shooting to take months or more than a year. But during that time, there can be damage to a community's trust in police.

Erick Laming, who is from the Shabot Obaadjiwan First Nation, is a PhD candidate in criminology at the University of Toronto and one of the co-authors of a use-of-force study for the Ontario Human Rights Commission. He says even one shooting can have wide-reaching implications, especially on marginalized communities.

That's why there must be transparency, Laming says. “It can impact that community for years.”

There has been a significant public distrust of police in Nunavut for a long time. RCMP killed Inuit sled dogs between the 1950s and 1970s as part of a federal plan to have people abandon their traditional lifestyles.

The distrust is compounded, Laming says, when a southern police force flies in to investigate shootings, clears officers, and keeps reports confidential.

Akwasi Owusu-Bempah, an assistant professor of sociology at the University of Toronto, says he understands it takes time to investigate a police shooting. But if the public is asked to have patience, police forces and investigative bodies need to be transparent about the outcomes.

There is evidence that lack of transparency around police shootings erodes trust, he says.

“It decreases levels of trust and confidence in police among those people who perceive that action to be unjust.”