Variants of concern will likely make up 40 per cent of all new COVID-19 infections in Ontario by the second week of March and future case growth will largely depend on how well we can control their spread, new modelling suggests.

The modelling, which was released by Ontario’s science table on Thursday afternoon, paints a slightly more optimistic picture than projections released two weeks ago which warned that we could see 5,000 to 6,000 daily cases by the end of March in “the most likely scenario.”

The latest modelling says that cases, hospitalizations and ICU stays “will likely soon increase” as the new variants spread, particularly the more infectious B.1.1.7 strain.

“The best analogy is a minefield,” Dr. Adalsteinn Brown, who is the co-chair of Ontario’s science table, said during a news conference at Queen’s Park. “Case numbers are down and the extended stay-at-home order in the GTA has been a powerful protection against more rapid growth but the worst dangers are immediately in front of us. Case rates are already rising in some of the public health units again and the new variants of the virus are another serious hazard ahead of us.”

There have only been 462 fully confirmed cases of COVID-19 variants in Ontario so far, though more than a thousand samples have screened positive for variants of concern and Brown said that officials believe about 20 per cent of new cases are actually mutations.

He also pointed out that the weekly growth in new variant cases in Ontario has been roughly on par with that of other countries where cases surged and that a “United Kingdom scenario where cases triple in about a month is not necessarily off the table,” given that the B.1.1.7 variant is thought to to be about 50 per cent more infectious than other COVID strains.

“Regardless of our ability to control total spread of cases, we anticipate that we will continue to see the variants of concern out compete the variant we have been dealing with up until now and become the dominant form. As they become the dominant form of the virus they are likely to actually increase case rates as we move forward,” Brown warned. 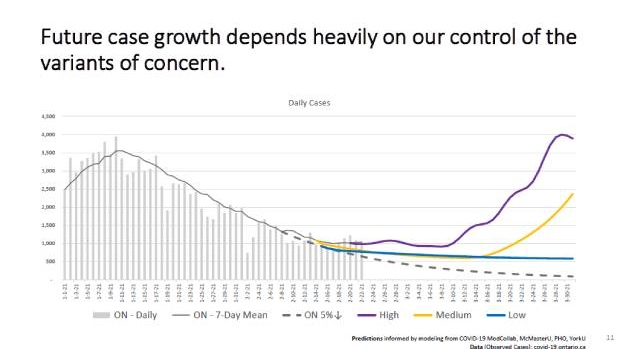 ‘A better summer is in sight,’ Brown promises

The last time that modelling was released on Feb. 11 Brown urged the Ford government not to lift restrictions and warned that doing so would pus at “real risk of a third wave and potentially a third lockdown” in the spring.

However, on Thursday he said that the latest data now shows “a clear improvement and a clear path forward,” despite the lifting of the stay-at-home order outside of Toronto, Peel and North Bay.

He said that there may be “isolated flare-ups” through the summer and into the fall, particularly in congregate settings, but stressed that if the government acts “very quickly to make sure those don’t spread” it can protect the gains that the province has made.

“A better summer is in sight,” he said.

Cases have been rising

Ontario’s seven-day rolling average of new COVID-19 cases peaked at 3,555 on Jan. 11 but had been on a steady decline until recently.

The modelling released on Thursday suggests that hospitalizations could begin to increase again amid the recent rise in cases.

It says that in a worst case scenario, the number of COVID patients in the ICU could soon begin to rise from where it stands today – 316 – and hit 350 by the end of March, placing significant strain on hospitals once again. Meanwhile, in the two other scenarios, ICU admissions will continue to decline but will still hover around 150 by the end of March, which is the line at which hospitals in some hard-hit areas had to begin cancelling elective care.

The good news is that there has been a “sharp” drop in both cases and fatalities in long-term care homes following the vaccination of residents and staff and those gains are likely to replicated in other sectors, as more priority groups are vaccinated.

“The December lockdowns helped keep infections out of our long-term care homes and prioritizing vaccination in these same homes protected their residents. Together these changes likely saved more than 300 lives alone between Dec. 14 and Feb. 10,” Brown said.

The release of the latest projections came as the number of active infections in Ontario increased for the first time in weeks on Thursday, rising from 10,050 to 10,071.

Brown said that there is “a period of remaining risk before the pandemic likely recedes in the summer.”

The release of the latest projections came as the number of active infections in Ontario increased for the first time in weeks on Thursday, rising from 10,050 to 10,071.

Brown said that there is “a period of remaining risk before the pandemic likely recedes in the summer” and that the major challenge will be protecting the healthcare system over the next few months to allow widespread vaccinations the chance to work.

““We are in this interphase period. You can use the terms precarious or tenuous and we have to be very cautious,” Chief Medical Officer of Health Dr. David Williams said. “While we are allowing some areas to move in the framework it is not everything opening up. Even in the green zones we have our public health measures in place. The critical personal ones are not changing.” 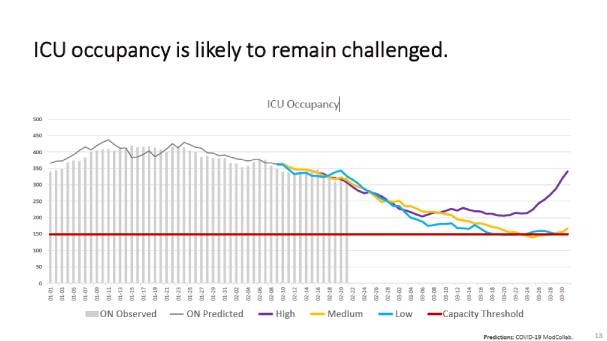