One person charged after fire, flood forces evacuation of hotel

One person has been charged with mischief after a hotel near Pearson International Airport had to be evacuated due to water damage and an electrical fire early Sunday.

Emergency officials were called to the scene after a small fire broke out in the electrical room of the hotel.

Police and firefighters arrived to find water seeping from an emergency fire hose on the seventh floor. The water also caused the hotel’s sprinkler system to malfunction on the third floor, causing extensive water damage to the lower floors.

The hotel was evacuated, leaving up to 500 guests scurrying to make alternate plans. About 30 cabs were sent to the hotel to move guests to other venues, Toronto police said.

“I was sleeping and there were alarms all over,” one guest told CP24. “I picked up the phone to call reception and I was told to evacuate immediately. I came down and I was half naked.”

The hotel said guests would not be charged for the night.

After investigating, police said the incident appears to have been a case of mischief involving a hotel guest who had been drinking.

Pictures from the lobby showed a sagging ceiling with garbage bins set up on the ground to try and catch falling water.

Firefighters say the damage is estimated to be in the tens of thousands of dollars.

The hotel says it is now looking to make alternate arrangements for guests who were booked to stay the rest of the week. The final day of a science fiction conference that was taking place at the hotel has also been cancelled.

Police say Kevin Taylor, 35, of Cambridge, has been charged with mischief in connection with the incident. 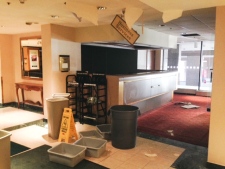 Garbage bins are set up to catch water in the lobby of the Holiday Inn on Dixon Road after an open fire hose on the third floor caused extensive damage Sunday, July 6, 2014. (Cristina Tenaglia/CP24)

Hotel guests and firefighters are pictured outside a hotel on Dixon Road where a fire broke out Sunday, July 6, 2014.