One person dead, 2 others injured after early morning crash in Brampton

One person has died and two others have been injured following an early morning collision in Brampton on Saturday.

Emergency crews were called to the area of Hurontario Street and Sandalwood Parkway around 5 a.m.

According to Peel Regional Police Insp. Stephen Duivesteyn, two vehicles were initially involved in the collision and a third car was damaged as a result of the debris.

Duivesteyn said that while it is still early in the investigation, the impact between the first two vehicles was “high,” and resulted in a traffic light being knocked down.

“One vehicle I can confirm was travelling westbound on Sandalwood, a second vehicle was travelling southbound on Hurontario. The third vehicle … was an after collision due to the amount of debris on the roadway here this morning,” Duivesteyn told CP24 at the scene.

“We have an engine block that has landed about 50 to 100 metres south of the intersection.” 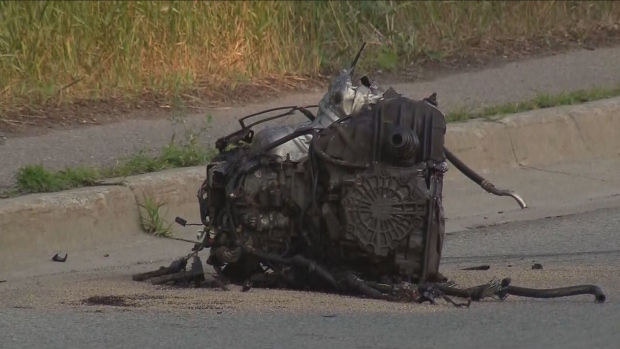 A man was pronounced dead at the scene, paramedics confirmed, while another man was transported to a trauma centre with serious injuries.

A third person sustained minor injuries and was taken to a local hospital for treatment.

Duivesteyn said that one person fled the scene, but officers located them a short while later. A man believed to be the driver of a red vehicle involved in the original collision has been taken into custody on suspicion of impairment.

No charges have been laid so far.

The red vehicle believed to have been travelling southbound on Hurontario ended up off the roadway behind a bus shelter. The vehicle damaged by the debris can be seen on the side of the road. 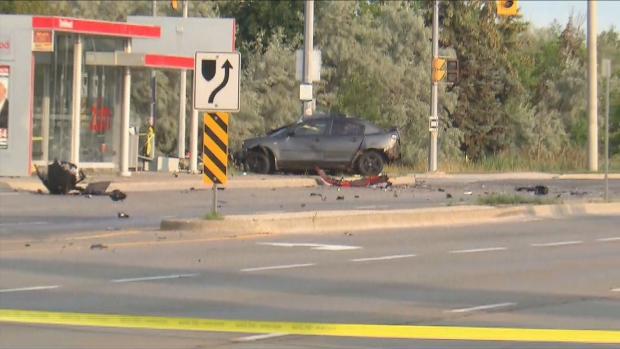 “The amount of damage to both vehicles is completely severe,” Duivesteyn said. “The red car, it has high damage to it. The fact that someone walked away from that vehicle is astonishing to me.”

Roads in the area are expected to be closed for several hours as police investigate the incident.