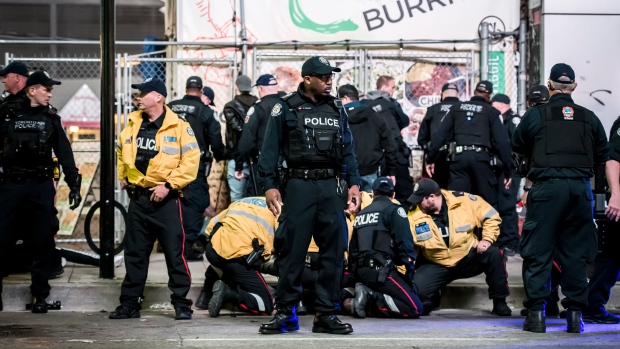 Police detain a person after gunfire sounded in the early morning hours as street celebrations wind down after the Raptors defeated the Golden State Warriors during Game 6 NBA Finals to win the NBA Championship, in Toronto on Thursday, June 13, 2019. THE CANADIAN PRESS/Christopher Katsarov

A 19-year-old man was rushed to hospital in life-threatening condition after an early morning shooting that occurred as fans celebrated the Raptors first NBA championship near Yonge and Dundas streets.

The shooting took place at Yonge and Gould streets at around 4:15 a.m.

Police say that special event constables who were in the area to manage the crowds arrested seven people at the scene.

It is unclear what those people were doing in the area, however an officer who spoke with CTV News Toronto said that they were “certainly mixed with people coming up Yonge Street celebrating the Raptors."

Thousands of fans had previously flooded the area to celebrate the Raptors win in the moments after they defeated the Golden State Warriors in Game 6 of the NBA Finals.

The crowd had mostly dissipated by the time the shooting occurred, though large numbers of revelers were still in the area.

“We don’t know if there was a nexus between the celebration and the shooting but it was certainly in close proximity and that will be investigated by 51,” Supt. Michael Barsky told CP24 at the scene earlier on Friday morning. .

The victim was taken to hospital with multiple gunshot wounds.

"The officers responded fantastically. Right from the start, as soon as things happened, boom they were there, made the apprehensions," he told CP24 on Friday.

"We had hundreds of police officers… and yet this gunplay happens right there."

He said it does not appear the shooting was related to the Raptors win.

"There is nothing that indicates that it is related to the Toronto Raptors winning the championship but because of the geographic location and obviously because people were celebrating there, it is related geographically," he said.