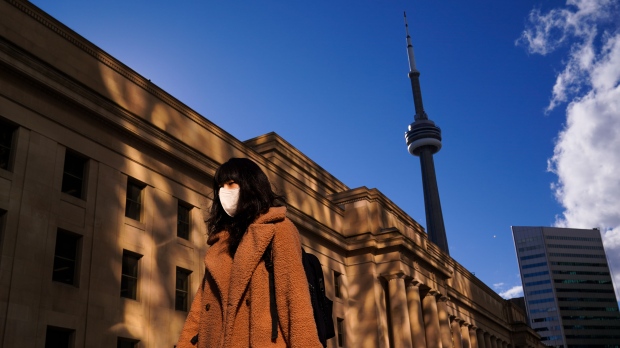 A woman wearing a face mask to help curb the spread of COVID-19 walks along Front Street in Toronto on Monday, November 1, 2021. THE CANADIAN PRESS/Evan Buhler

Ontario is reporting more than 4,000 new cases of COVID-19, the highest daily single-day total confirmed in the province in nearly eight months.

Provincial health officials logged 4,177 new infections today, up from 3,301 on Saturday and 1,476 just one week ago.

Two more virus-related deaths were confirmed over the past 24 hours.

Today's tally is the highest daily case count reported in the province since April 23, when 4,505 new infections were reported.

Over the past several months, unvaccinated people, who currently represent about 18 per cent of Ontario's population, have been significantly overrepresented in daily case counts but today, those individuals only account for about 21 per of all new infections.

Rapid spread of the more infectious Omicron variant, which is now believed to represent about 80 per cent of all new COVID-19 infections in Ontario, has led to explosive case growth over the past week.

Ontario's seven-day rolling average of new infections has now jumped to 2,542, up from 1,236 one week ago. Ontario's Science Advisory Table now says Omicron is believed to have a doubling time of 2.8 days.

This development has prompted the province to implement a series of new public health restrictions before the holidays to slow transmission.

Capacity at restaurants, gyms, retail and grocery stores have now been reduced to 50 per cent. The number of people permitted to gather privately indoors has been scaled back to 10.

The province is also scrambling to roll out third doses to every adult in the province as officials warn that waning immunity from the two-dose vaccine series has increased the need for a booster shot.

Starting tomorrow, everyone in the province aged 18 and up who received their last dose more than three months ago will be eligible to book their booster dose.

While case counts have risen dramatically in the province, there has not yet been a corresponding spike in intensive care admissions. The province says there are currently 159 COVID-19 patients receiving treatment in the ICU, up one from last Sunday.

It should be noted that hospitalizations typically lag daily case counts by a couple of weeks and experts have cautioned that ICU admissions will not stay flat for long. Recent modelling from the science table suggested that just based on the sheer number of new infections reported each day, ICU occupancy could reach "unsustainable levels" in the near future without "prompt intervention."

With 51,151 tests processed over the past 24 hours, officials are reporting a provincewide positivity rate of 8.7 per cent.