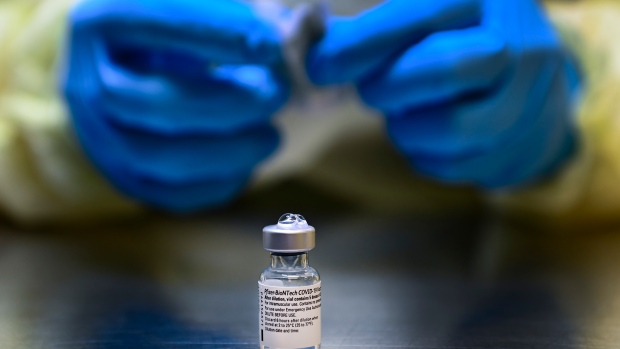 Starting tomorrow, the provincial COVID-19 vaccine booking system will open up appointments to people ages 60 and over in all public health units currently using the province's portal.

The Ford government dropped the age of eligibility this week as the province enters Phase 2 of its vaccination program.

The province says a plan is currently underway to begin vaccinating people ages 50 and older in “hot spot communities” in Ontario.

Officials have identified 100 Ontario postal codes that represent hot spot communities disproportionately impacted by COVID-19 and those communities are being prioritized for vaccination in April and May.

"We will be immediately targeting hot spot postal codes to help get this third wave under control... We have to focus on where we see the problem. Three regions, York, Peel, and Toronto, represent 60 per cent of the COVID cases so when you have an inferno going on somewhere, you have to turn the hoses there," Premier Doug Ford said at a news conference on Tuesday afternoon.

"You have to continue doing the whole province but we are really focusing on the hot areas and we will be sending mobile units into those hot areas... hopefully once we do that, we are going to see the numbers come down."

Some hospitals in hot spot areas in Toronto started taking vaccination appointments for those 50 and over last week and residents 45 and older is some postal codes in York Region are now eligible for a shot.

The Ford government has not yet announced any plans to bump up the timeline to vaccinate essential workers who cannot work from home despite calls for it to do so. Currently essential workers are set to receive a shot starting in mid-May.

On Monday, Mayor John Tory said the city is considering a strategy to take vaccine doses directly to certain factories and other high-risk workplaces in an effort to curb outbreaks of the virus.

Other municipal leaders in the Greater Toronto Area, including Mississauga Mayor Bonnie Crombie, have pleaded with the province to do more to vaccinate essential workers.

While the province is not yet changing its vaccination strategy to inoculate essential workers sooner, officials say as the age of eligibility is lowered in hot spot communities, it is expected that essential workers will be among those who are prioritized for a shot.

The province says the focus must still be on older Ontarians, as they are most at risk for severe health consequences if infected.

In a tweet published on Monday, federal Health Minister Patty Hajdu said more than four million doses of a COVID-19 vaccine have been provided to the province of Ontario to date. As of Tuesday morning, 2.6 million vaccine doses have been administered in Ontario and 322,000 people are fully vaccinated.

When asked about reports of vaccines sitting in freezers, Ford said nearly all doses that were received by the province over the weekend have been allocated.

"What really drives me crazy is when some folks, be it the media or some political folks, are saying oh they have 1.3 million vaccines. What you don't tell the people, which I'm telling them right now, folks, we just got them two days ago. Over the last few days, they just literally landed on our doorstep. It takes a day for the distribution, we got it out, and we're ready to go," he said.

Ontario expects to receive about three million more doses of the Pfizer vaccine between now and May 24 and another 750,000 doses of Moderna's vaccine. Another 122,900 doses of AstraZeneca are coming this week but future allocations have not been provided.

The province says based on current supply, Ontario’s target is to administer 100,000 doses per day in the month of April.

"We have to get the most vulnerable, the elderly, those appointments booked.... So that’s one part of it," Ford said on Tuesday.

"Part 2 (is) we have to go in to the hot areas, and really focus on targeting the hot spots. And number three, we have to go into the high priority, essential manufacturers... large companies. You saw what happened at Amazon out in Brampton. We have to start focusing on those areas in the hot spots and I know we are working on a plan as well for the teachers."