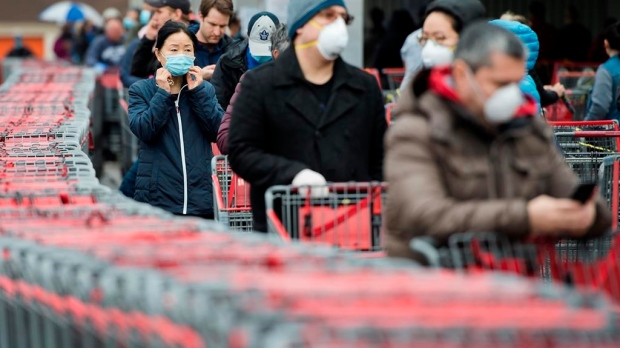 Shoppers are shown at a big box store in this file photo. (The Canadian Press)

NDP Leader Andrea Horwath is accusing the Ford government of “walking away from the business community” and leaving them to deal with the logistical complications around enforcing the new vaccine certificate system “on their own.”

Horwath made the comment during a news conference outside Queen’s Park on Monday morning.

Her criticism comes as the Ministry of Labour adds more than 100 new health and safety inspectors who will largely be responsible for educating businesses on the new vaccine requirement. The ministry, however, has not yet made any additional funding available to businesses to help them cover the costs of enforcing the policy.

“I think it is pretty clear that the government has basically walked away from the business community, particularly small businesses, and left them to deal with this on their own. There is just no doubt that small business is still suffering and we have asked many times for the government to put in place another round of small business supports which would have helped perhaps in allowing them to prepare for an implement these extra measures that they are now expected to undertake,” Horwath said. “The government should have been much more prepared and should have provided a number of opportunities for tools, for communications, for recommendations around how restaurants should handle the certificate issue but they didn’t.”

A number of groups have raised concerns about the fact that the vaccine certificate system will largely put the onus on businesses to inspect proof of vaccination documentation and adjudicate potential disputes.

They have also expressed unease about the position that it could put some restaurants and other businesses in, should they have to deny entry to someone without proof of vaccination.

During a news conference earlier on Monday, Minister of Labour, Training and Skills Development Monte McNaughton conceded that the new policy is “clearly challenging” for small business owners in particular.

But he said that while there have been some instances in which police have had to be called to a particular establishment, it has been “very, very minimal.”

“What I've heard is great things over the last few days, people actually working together, and I have overwhelming confidence in the people of Ontario to treat one another with respect,” he said. “This is a global health pandemic and Ontario is doing a heck of a lot better than many jurisdictions within Canada, for example, so I just want to encourage everyone to work together. This is a challenge for everyone but our goal is to ensure that we keep businesses open and keep workers and customers safe.”

McNaughton said that there are now 507 inspectors working for the Ministry of Labour, which is the highest number ever.

He said that the inspectors are taking a “education first” approach to the new vaccine certificate requirement but did not directly respond to a question about whether any charges have been laid since the requirement went into effect last week.

Meanwhile, Horwath said that she has already heard from a number of businesses concerned about the costs related to enforcing the new policy and is worried there are “just not enough resources out there” given the sweeping nature of the change.

“This is another example of Doug Ford pinching pennies not wanting to spend the money and everybody else having to step up and pay the price,” she said.