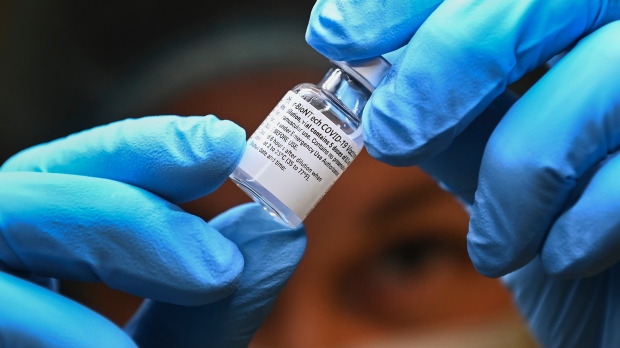 The head of the Ontario Hospital Association says hospitals in the province are moving to urgently reactivate mass vaccination programs as the Omicron variant – the most contagious COVID-19 variant discovered so far – quickly moves to become the dominant variant in the province.

“Ontario hospitals are moving to implement instructions to urgently re-activate mass vaccination programs,” Ontario Hospital Association CEO and President Anthony Dale said in a tweet late Monday. “This will have a major impact on other clinical services but there’s no other choice. As we said on Saturday this is truly a race against time.”

Omicron spreads more easily than other variants of COVID-19. Early research has shown that while the variant does a better job of getting past two doses of vaccine, a third dose appears to greatly increase protection levels.

Ontario hospitals are moving to implement instructions to urgently re-activate mass vaccination programs. This will have a major impact on other clinical services but there’s no other choice. As we said on Saturday this is truly a race against time. #onpoli #onpoli #VaccinesWork

Chief Medical Officer of Health Dr. Kieran Moore said Friday that the latest data showed the variant accounted for some 10 per cent of cases in the province and said that could quickly increase to 20 per cent by this week.

Speaking with CP24 Tuesday night, the chair of the Council of Ontario Medical Officers of Health said the variant’s share could be close to 50 per cent within days.

The head of Ontario's Science Advisory Table called the spread of the variant “historical” and “unprecedented” Monday and urged people not to be lulled into a false sense of security by some suggestions that the variant results in milder illness.

The newfound urgency for booster shots has lead to calls to quickly accelerate vaccinations.

When Ontario’s full vaccination effort was underway in the spring, there were mass vaccination centres, hospital vaccine sites, pharmacies and dozens of pop-up clinics involved in the effort. Those channels lead to a vaccination campaign that saw Ontario give out close to a quarter million doses on several peak days.

But that apparatus was scaled back considerably once most of the population was vaccinated with two shots and there have been concerns recently as to how quickly Ontario can scale up to deliver third doses.

The province has given out an average of 67,000 doses per day over the past seven days, with just under 35,000 doses handed out Sunday.

Provincial data do not indicate how many of those doses are third doses. The province says that so far, there are roughly 1,128,000 Ontarians who have had three doses.

Bookings for a third dose opened up to all Ontario residents 50 and up Monday, adding some 3.4 million residents to the group eligible for boosters.

Ontario Health Minister Christine Elliot said that as of 3 p.m., 115,000 people had signed up to receive their booster dose through the provincial booking system, though there were some reports of technical problems in the first few hours.

All adults 18 and over in Ontario are currently scheduled to become eligible for a third shot on Jan. 4.

Dale did not say exactly which clinical services might be impacted in hospitals. Health care personnel have been stretched thin after nearly two years on the front line of the virus. Nursing groups have said that many of their members have left or taken leaves of absence because of burnout or to protect their health.

Speaking with CP24 Monday, infectious diseases specialist Dr. Isaac Bogoch urged people to remember  that while vaccines are not bulletproof, they offer the best protection available.

“It's not like if you have two doses or three doses of the vaccine, you're not going to get infected. Of course you can get infected, you absolutely can,” Bogoch said. “What's abundantly clear is that these vaccines will reduce your likelihood of getting infection, with three doses being better than two. But they also significantly reduce your risk of having a more severe outcome such as hospitalization, an ICU stay or death.”

Prime Minister Justin Trudeau told reporters Monday that Canada has secured enough supply for all Canadians to receive a third dose, but that distributing those doses is up to the provinces

“Our responsibility as a federal government has been to make sure that there is a supply of boosters for all Canadians,” Trudeau said. “We have done that. There are sufficient vaccine doses for Canadians to get boosters. The logistics of rolling out those boosters to the priority age groups and eventually to everyone is being handled by the provinces. We will continue to be there to support them as they do this important work in keeping Canadians safe.”