Sixteen members of the Ontario New Democratic Party were escorted out of the legislature one-by-one during Wednesday’s question period after making outbursts over legislation that prevents education workers from striking.

It started when interim NDP Leader Peter Tabuns accused the government of lying to the public. He refused to apologize or rescind the remarks, and was told to leave.

That’s when MPPs started to shout and bang on tables in protest of the back-to-work legislation. They were each ceremoniously kicked out of the legislature and have now been prohibited from returning for the rest of the day.

“I think our message is clear. Get rid of the bill, get back to the bargaining table,” Tabuns told reporters after the fact. ”I think all our outbursts, if you want to put it that way, are that [Ontario Premier Doug Ford] has to treat people fairly. He’s not doing it. He’s not telling us the truth.”

Just under half of their members will remain to continue to debate the bill. Those that were ejected waited outside the legislature and high-fived and shook hands.

"Today we want to make this public statement that their approach is unacceptable," he said.

When asked about the incident later in the afternoon, NDP Education Critic Chandra Pasma argued it wasn’t a stunt, despite the fact the MPPs deliberately found themselves being tossed from the legislature.

“We were standing up for the rights of our kids and our workers and the government is not listening and we are doing our best to make sure that the government has to listen,” she said.

The NDP's actions will not slow down the passage of Bill 28. The government is voting today on a number of motions meant to fast-track legislation mandating education workers into a four-year contract while preventing them from job action.

Education Minister Stephen Lecce has previously said it hopes to pass Bill 28—Keeping Students In Class Act—ahead of Thursday, when the union representing education workers was legally allowed to strike. 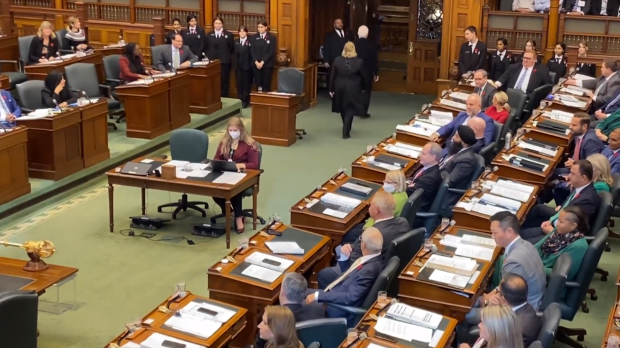 In order to do so, the Progressive Conservatives have put forward two motions meant to allow them to pass the legislation earlier than expected.

The second motion allows the legislature to sit until midnight from now until the end of the fall session on Dec. 8.

The government told CTV News Toronto this was “typical” for the last 18 sittings in a session and that just because MPPs can be in the legislature until midnight, doesn’t mean they will be. The government can also “cancel” it at any time.

It effectively makes it illegal for them to strike or assemble. Individuals who defy the legislation could face fines of up to $4,000 while the union itself may be handed a $500,000 fine.

The Canadian Union of Public Employee has said that it will strike on Friday regardless of whether or not the government passes the bill. The two parties still have a few days to negotiate a deal; however Lecce said Wednesday the government will not entertain any new proposals unless the union rescinds its strike notice.

Interim NDP leader Peter Tabuns is escorted out of the legislature on Nov. 2, 2022.