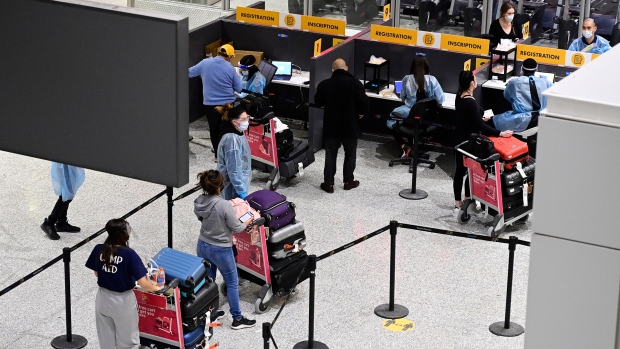 Travellers, who are not affected by new quarantine rules, arrive at Terminal 3 at Pearson Airport in Toronto early Monday, February 22, 2021. THE CANADIAN PRESS/Frank Gunn

Ontario is not in the process of developing a mass screening technique to detect the B.1.617 coronavirus variant currently devastating India and already present in the province because global authorities have not yet deemed it a variant of concern.

The U.S. Centers for Disease Control, Public Health Agency of Canada and other bodies still consider it a “variant of interest,” not confirmed to be more infectious and requiring further study.

“Currently, B.1.617 has not been designated as a variant of concern and therefore more research and evidence is needed about the mutations on the B.1.617 variant of interest and its potential impact on human health.”

Instead, the province continues to rely on random sampling of positive cases of COVID-19, run through an expensive and laborious process known as whole genomic sequencing.

As a result, officials from Public Health Ontario told CP24 no other positive examples of the B.1.617 coronavirus mutation have been detected since last week, when officials disclosed 36 cases.

Instead of developing a PCR-based screen for B.1.617, Public Health Ontario says it is instead running five per cent of samples that test negative for the specific spike protein mutation found in the UK and South African variants through whole genomic sequencing, with help coming from the National Microbiology lab in Winnipeg.

Initial research from India suggests that B.1.617 causes more severe infection and outcomes in younger patients than previous variants circulating in that country.

Its spread in India has overwhelmed hospitals and crematoria alike, with more than 300,000 new infections reported daily this week and deaths spiking to levels not seen before.

As a result, Canada banned all direct incoming flights from India and Pakistan on April 22.

The B.1.617 variant arriving in the province prompted both Ontario Premier Doug Ford and Brampton Mayor Patrick Brown to call for new restrictions on air travel.