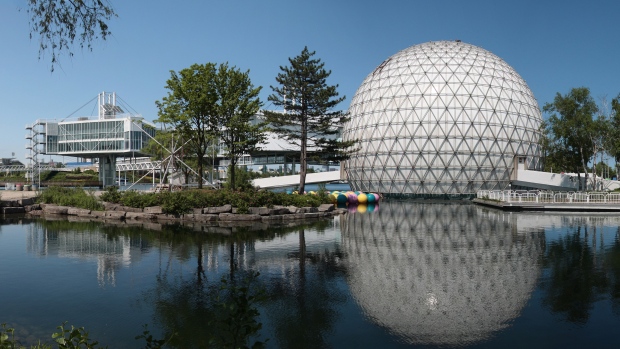 Ontario Place is seen in this undated photograph provided by the World Monument Fund,

TORONTO - Sports fans can't pack into arenas this summer, but a new Toronto drive-in theatre hopes to get them a bit closer to the action.

Maple Leaf Sports and Entertainment has partnered with Live Nation to open a 40-foot movie screen to showcase a series of Toronto Maple Leafs and Toronto Raptors playoff games.

The OLG Play Stage, located at Ontario Place, will also host a lineup of concerts over the coming weeks.

Admission for sports will be a minimum $25 donation towards the MLSE Foundation, while concert prices vary by the performer.

The first event is slated for Aug. 7 when the Leafs play the Columbus Blue Jackets in Game 4 of their Stanley Cup qualifier series.

Organizers say each playoff game will begin with a 30-minute pre-game show, and a selection of food and beverages will be available for pre-order, as well as merchandise, that will be delivered to your vehicle.