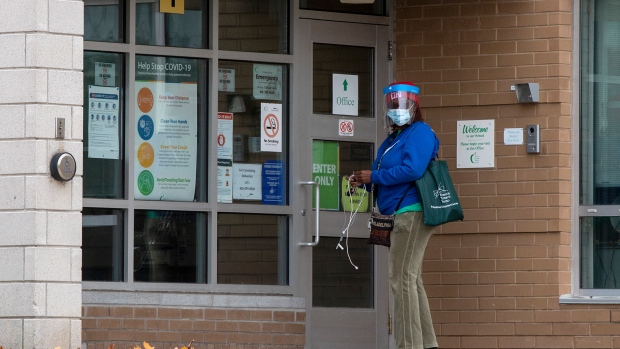 Ontario reported another 173 new COVID-19 cases in its publicly-funded schools on Wednesday, as the number of schools with an active case fell for a second day and two additional schools closed.

Active cases associated with schools have declined over the past two days after hitting a peak of 1,637 on Oct. 4.

There are now 1,556 active cases of COVID-19 tied to provincial publicly-funded schools, representing 34 per cent of all active cases detected in the province.

At this point last year, public schools were reporting a cumulative total of 470 active cases.

Across the Greater Toronto and Hamilton Area (GTHA), school boards reported 654 known active cases of COVID-19, down from 663 yesterday and a high of 754 on Sept. 29.

At least 189 class cohorts were isolating at home due to confirmed exposures.

Yesterday, the province approved the use of rapid antigen COVID-19 tests in limited circumstances for unvaccinated asymptomatic public school students, after a month of refusing to do so in the public system and actively curtailing distribution of tests to parents and community groups.

There are now 773 schools with at least one active case of COVID-19 and eight schools are now closed.