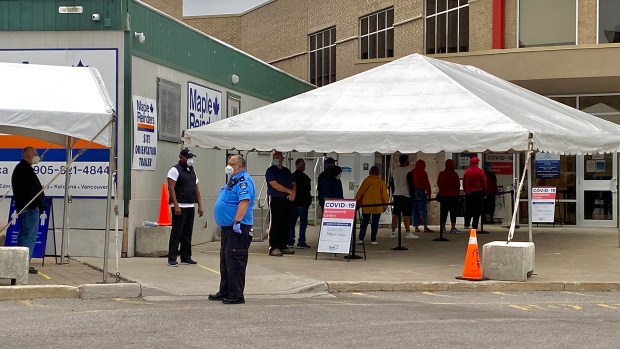 Ontario public health officials are reporting 446 new COVID-19 infections on Tuesday, a marked increase since the past weekend, as well as two new deaths in young adults.

The province reported 323 cases on Saturday, 326 cases on Sunday and 404 cases on Monday.

Much of Monday’s case growth came from outbreaks in agricultural settings in southern Ontario, including a farm complex with 164 cases among its migrant workforce in Simcoe, Ont. and a greenhouse near St. Catharines with at least 20 cases.

A daily epidemiologic summary provided by the Ontario government shows that two COVID-19 patients between the ages of 20 and 39 died of the virus in the past day, bringing the total death count in that age group to 10.

All but 102 of the centrally-reported deaths have occurred in people above the age of 60.

A further 10,622 specimens remain under investigation.

Twenty more people were admitted to hospital for treatment of COVID-19 in the last day, raising the provincial total to 801.

There were 125 people receiving treatment in intensive care units across Ontario, the same number as Monday.

Of those, 87 were breathing with the help of a ventilator, down two from Monday.

Since the outbreak began in Ontario on Jan. 25, five per cent of cases have been related to international travel and 61 per cent have been attributed to known local outbreaks or were close contacts of previously-identified cases.

But provincial officials do not have any information on the cause of a full third of Ontario’s cases.

They are listed as either having “no known epidemiological link” or simply “unknown.”