The number of new cases of COVID-19 in Ontario has increased, bringing an end to three straight days in which the transmission of the virus appeared to be on the wane.

The jump in new cases comes after the province saw three straight days in which the number of new cases being reported declined, leading to optimism from some that we could finally be seeing the other side of the epidemic’s peak.

The province is also reporting 59 deaths in people who had contracted the virus. It is the second straight day in which a grim new record has been set, topping the 57 deaths reported on Monday.

“We had three good days and then all of a sudden today it spikes up again. So we need consistency (with physical distancing) right across the board to see a downward slope over the next couple of weeks. That is absolutely critical,” Premier Doug Ford said at Queen’s Park on Tuesday afternoon. 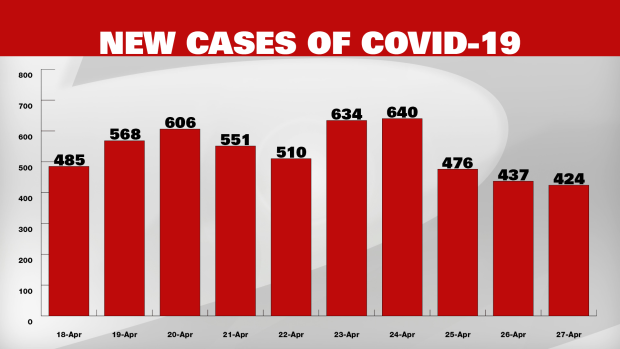 Today marks the first time since late last week that the province has seen the number of new cases confirmed over a 24-hour period surge past 500 and it comes on a day in which the total number of tests completed decline, going from a record 12,550 to just under 11,000

The number of people in intensive care units, however, does appear to be holding relatively steady, which is good news for Ontario’s healthcare system.

The latest data reveals that there are 239 people in ICU units with COVID-19, down from 241 one day prior. That number has mostly stayed the same for weeks now after reaching a high of 264 on April 9.

It should be noted that the province has said that it cannot begin its reopening plan until there is a “consistent” two-to-four week decline in new COVID-19 cases and a reduction in new hospitalizations as a result of the virus so any surge would set back that timeline.

Officials, however, have warned in the past that the peak of any epidemic can be a “bumpy road” and that cases won’t necessarily decline each and every day.

“It is really not a number of cases. What we are looking for is a downward trend. So if we still keep saying hundreds of increases in cases on a daily basis that will tell us there is still a problem,” Health Minister Christine Elliott said at Queen’s Park on Tuesday afternoon. “We need to see those numbers going down consistently. There may be blips in the system from time to time but we definitely need to see a downward trend, it can’t just be a coincidence from day to day.

While long-term care residents continue to make up about three-quarters of all deaths (705), there has been an increase in younger people dying after contracting the virus.

Over the last 24-hours the province added a sixth death in a category for people ages 20 to 39. That brings the total number of deaths in that group to six. It stood at two as recently as April 23.

It should be noted that the death number provided by the province is only accurate as of one day previous and sometimes lags behind reporting by individual public health units. A count by CP24 found that as of 9:30 a.m., Ontario’s 34 public health units are in fact reporting 996 deaths in COVID-19 patients.

Here are some other highlights from the data: