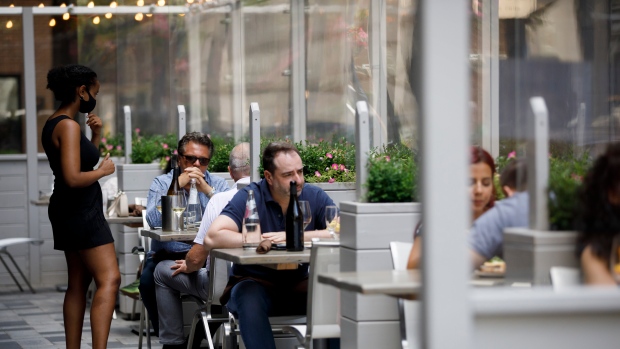 A waiter talks with patrons at a patio in Yorkville in Toronto, on Friday, June 26, 2020. THE CANADIAN PRESS/Cole Burston

Ontario officials confirmed Monday that restaurant workers will in fact be included in Phase 2 of the province’s COVID-19 rollout, despite not being included a week earlier.

The question surrounding where members of the food and beverage industry stood in Ontario’s vaccine distribution plan has been stumping those advocating for the workers since the government released the list of those eligible for the shot.

On March 5, officials released a detailed list of people who will be eligible for the COVID-19 vaccine in Phase 2.

Under this categorization, workers were divided into two priority groups. The first included teachers, child-care workers and those in food manufacturing or agriculture. The second included high-risk and critical retail workers, such as those in grocery stores and pharmacies, as well as lower risk workers in financial services.

Restaurant staff or members of the food and beverage industry were not specifically mentioned.

CTV News Toronto reached out to the Ministry of Health five days after the list was released to confirm whether or not restaurant workers would be included in Phase 2 of the rollout. After a week, a spokesperson for the ministry sent a statement that simply reiterated the list already presented by health officials.

When pressed again about whether that meant restaurant workers would not be included, CTV News Toronto received no response.

Restaurants Canada was also told by government officials interpreting the list that the industry would not be included in Phase 2 and that employees would be vaccinated according to their age category.

At the same time, James Rilett, VP of the group’s Central Canada division, told CTV News Toronto last week that there may be updated documents coming regarding eligibility for the vaccine.

“So it may change, but as of now restaurant employees are not covered in the Phase 2 rollout,” he said at the time.

However, on Monday three government officials appeared to confirm the opposite was true. Both the Ministry of Health and the Premier’s Office have confirmed to CTV News Toronto that restaurant workers will be part of Phase 2, as well as the province’s solicitor general.

No explanation was provided for why this was not clear at the beginning of the month, nor have any official government documents or websites been updated to specify restaurant workers are included.

Speaking to CTV News Toronto on Monday afternoon, Rilett said that he has not heard that news in writing, saying that he has been getting messages from officials since last week saying that “it’s implied” that restaurant workers would be included as they cannot work from home.

“It’s saying it’s not excluded, some are saying it’s implied, but they also say they are currently working on guidance for public health,” Rilett said. “Until I see it in writing I won’t feel comfortable…no one has come out and put it in writing yet.” 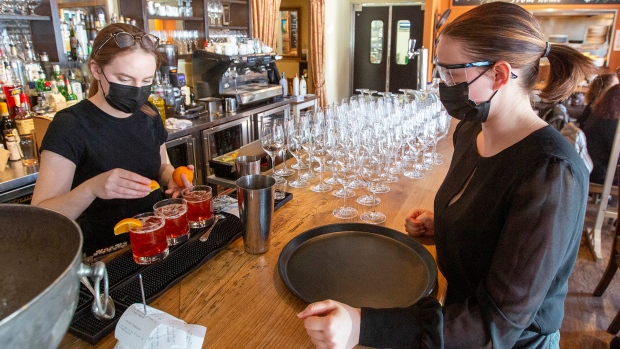 Under the government’s current COVID-19 distribution plan, essential workers who cannot work from home will begin to be vaccinated in June. In Phase 2, which is set to begin in April, anyone 60 years of age and up, who has an underlying health condition, lives in a congregate setting or who is part of a vulnerable population in a COVID-19 hot spot with a high incidence rate will get their shots first.

Ontario Premier Doug Ford was asked about this time frame on Monday afternoon at news conference. Just before the weekend, his government allowed restaurants and bars in the strictest tier (grey) of the lockdown framework to open patios while increasing capacity for indoor dining in the second strictest tier (red) to 50 per cent, with a maximum of 50 people.

“I understand the situation there they're in, but you know something we got to be super, super cautious but for mental health, I'll tell you, we needed that,” the premier said of his decision to open patios. “We're going to continue focusing on the most vulnerable, most vulnerable is 80 plus.”

The solicitor general said that residents shouldn’t be so fixed on dates for when they will get their vaccine, but stopped short of saying whether the June timeline was going to be reassessed.

“As the supply increase the dates shrink, and that is a positive thing,” Sylvia Jones said. “I think we're all anxious to make sure that everyone who has access to the vaccine will get it quickly.” 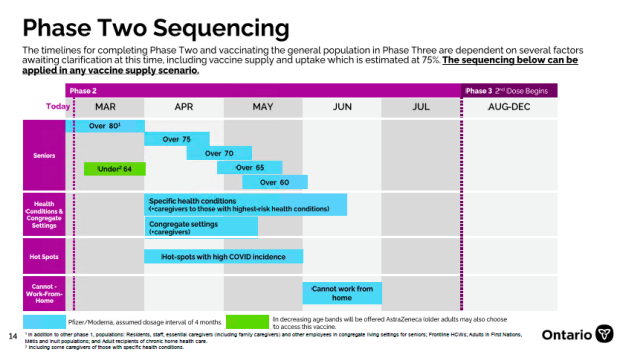 When asked if there was any thought being given to moving restaurant workers up in the list of prioritization considering the reopening of indoor dining in most of the province, the solicitor general said “I don't think it's politicians who should be making those decisions.”

“The science table, the bioethicists, the clinicians have been working tirelessly for a number of months on this … we have relied on their advice in the past and we will continue to do that going forward.”