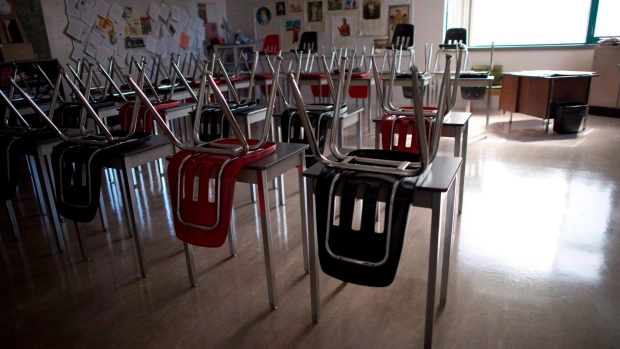 Vacant desks are pictured at the front of a empty classroom is pictured at McGee Secondary school in Vancouver on Sept. 5, 2014. (THE CANADIAN PRESS/Jonathan Hayward)

Schools in richer areas of Ontario fundraise twice as much as schools in poorer areas, creating a gap in education that could be limiting opportunities for some students, according to a report from an education advocacy group released Monday.

TORONTO -- Schools in richer areas of Ontario fundraise twice as much as schools in poorer areas, creating a gap in education that could be limiting opportunities for some students, according to a report from an education advocacy group released Monday.

The People for Education report, based on survey results from 1,254 schools, suggests that they depend on fundraising by parents and communities to increase budgets and to provide "enhanced or optional programming" such as field trips and some classroom materials.

This ends up "reproducing patterns of advantage and disadvantage" as students attending a school in an area where parents are more likely to have higher levels of education and make more money will raise more money and will have more resources at school than students in a low-income area.

"Experiences outside of the classroom help students develop competencies and skills that are foundational for success in today's economy and complex world. When schools rely on fundraising to provide these opportunities, it can create inequities," the report said.

"If public education in Ontario is to provide every child with an equitable chance for success, all students must have access to the programs, resources, and activities that foster competencies for long term success."

The report also noted that research shows extracurricular activities such as sports, music and art in schools are linked to positive well-being and learning outcomes that develop creativity, leadership and a sense of community.

For secondary schools, the top five per cent raised as much as the bottom 82 per cent combined, with some schools reporting raising $220,000, according to People for Education data.

Most elementary schools fundraise for technology, sports and charities, according to the report.

Ontario schools also raise funds by charging students fees for activities and materials used to complement and not replace education funding, such as agendas and optional art or music supplies. But the schools rely on fundraising to purchase items that can provide significant educational advantages for students, such as technology and sports equipment.

"This may be due to students' or families' concern about a stigma attached to being unable to pay fees," the report said.

In April, the Ontario government cut the amount of money school boards receive per student, though marginally increasing the overall funding, and slashed several education grants as part of its plan to eliminate an $11.7 billion deficit.

The People for Education report states that schools also apply for grants from businesses, philanthropic or non-profit organizations and the Ontario government, with amounts ranging from $100 to more than $100,000. In 2019, 75 per cent of surveyed elementary schools and 83 per cent of secondary schools report receiving money through grants.

While the amounts of some specific grants and funds will increase, others are being cut or eliminated entirely, also announced by the province in April.