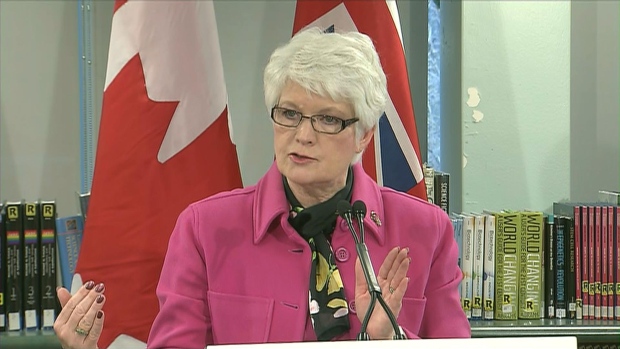 TORONTO -- Ontario's largest teachers' union is defending its decision to hold a workshop on "white privilege" at an upcoming convention, saying it has never been afraid to tackle controversial issues.

The Elementary Teachers' Federation of Ontario, which has 76,000 members, has a posting on its website looking for presenters for a workshop called "Re-thinking White Privilege."

"What we're trying to do is spark a conversation about this and raise awareness and a growing understanding about white privilege," ETFO president Sam Hammond said Thursday in an interview.

"An example is housing: people of colour feel they are discriminated against, that there is racism in play there when it comes to housing."

Hammond said as "a white guy in a suit" he's never been stopped by police for a random check, unlike many men of colour, and he's usually not challenged by security guards when he enters buildings after office hours.

The planned workshop has triggered a lot of debate, especially on radio and TV talk shows, said Hammond, who likened the controversy to the union's efforts in the late 1990s to help those in the lesbian, gay, bisexual, trans and queer communities get their rights respected.

"We got a very similar push back to that, but when you look at it now 15 years later, we're in a very different environment," he said.

Education Minister Liz Sandals said she had no concerns about the 'white privilege' workshop for teachers.

"It's really up to ETFO to decide what seminars they're going to do," she said. "They're an independent organization and they will have a look at what courses they're teaching I'm sure."

Sandals agreed teachers do need to learn about the diverse backgrounds and cultural differences of students in Ontario schools, but she appeared uncomfortable with the term "white privilege."

"Getting away from the title of the course, it is important that we have teachers who are sensitive to the fact that there are children who come to our schools from all around the world," she said. "I don't know what's in this particular course, but the need to address diversity is a real need."

Sandals ducked the question when asked if children of new Canadians should be taught that the white kids in their classes are privileged.

"I can't comment on content that I didn't do," she said. "My job as minister of education is to make sure that we have schools in which kids from all backgrounds, and that includes everyone, feel safe and secure."

Hammond said teachers would never single out one group in a class as different than the rest.

"Teachers are not going to go into the classroom and somehow suggest that all the white people here are privileged and you're not," he said.

"It's a very sensitive issue and one of the reasons we're doing the workshop for our members is to increase their awareness of it and sensitivity of the issue."

Members of ETFO who want to present the "Re-thinking White Privilege" workshop have until Friday to submit their ideas for the program.