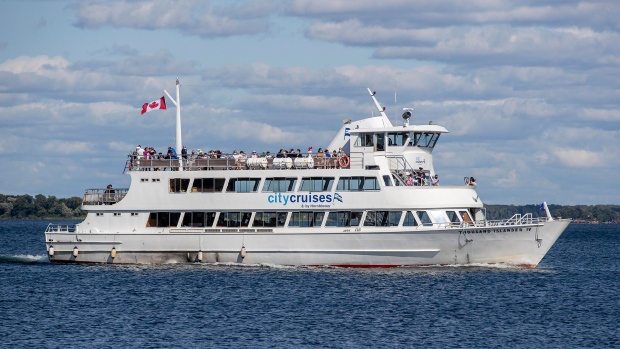 Tourists ride on a tour boat in Lake Ontario near in Gananoque, Ont. on Friday, July 30, 2021. THE CANADIAN PRESS/Lars Hagberg

MONTREAL -- Tourism operators have mixed feelings about the opening of the U.S. land border Monday.

An end to the 20-month closure of the world's longest undefended frontier marks a sign that restrictions are loosening and more international leisure travel may be on the horizon.

But if Canadians start to stream south for vacations and shopping sprees, they aren't spending their money on destinations here.

“There is definitely going to be a reduction in some numbers, for sure. That's absolutely inevitable,” he said.

“But as we start to welcome international visitors now back to Canada, as we try and push for PCR testing, changes to protocols, we're hoping to make sure that we're we're looking further afield to people as well to try and bring them to us.”

Travel and tourism organizations are lobbying the federal government, which opened its border to Americans in August, to end the ongoing COVID-19 test requirement to enter the country.

Currently, any Canadian returning home by land who wants to avoid quarantine needs to provide a recent molecular test that shows a negative result. Non-residents who test positive are turned away at the border.

At a cost of $150 to $300 per test, that can be a pricey proposition, particularly for families.

“Unless Canada changes that regulation or that order of not requiring a PCR test to re-enter the country, I don't think you're going to see large volumes of people heading into the United States,” said Walt Judas, head of British Columbia's tourism association. That holds true for both day trips and longer vacations, he said.

“Small communities like Osoyoos managed to retain a lot of Canadians who camped in their RVs for the duration of the winter. So those folks will likely do as they've done in years previous and head into the U.S.,” Judas said.

It's not just the campgrounds that will feel the impact of fewer visitors.

“They're all users of other venues and facilities and visit grocery stores and they eat in restaurants, some might even choose to stay in a hotel for a bit of a getaway that's more localized,” he said.

But Tourism Industry Association of Canada CEO Beth Potter says a border that lets visitors filter through in both directions for non-essential travel is one more step on the path to pre-pandemic levels of activity.

“More and more Canadians have discovered that Canada has a lot to offer,” she said. “We hope to see that trend continue next summer. And at the same time we would expect to see return of American visitors as well.”

One incentive for Ontarians to stay put is the province's staycation tax credit. Premier Doug Ford's government on Thursday rolled out a plan for the measure, which would give residents a 20-per-cent personal income tax credit for money spent in-province on leisure and accommodations in 2022.