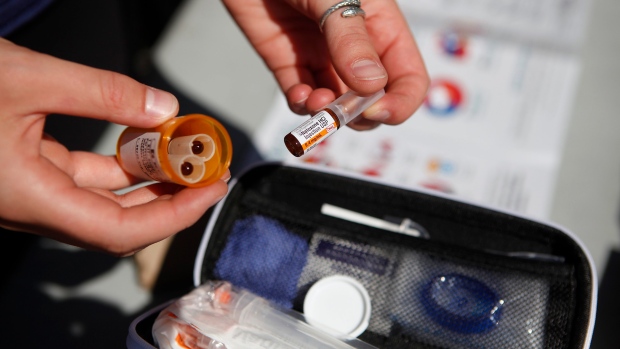 An organizer displays a naloxone kit that people can pick up for free as International Overdose Awareness Day training seminar takes place at Centennial Square in Victoria, B.C., on Saturday August 31, 2019. THE CANADIAN PRESS/Chad Hipolito

OTTAWA -- The COVID-19 crisis has overshadowed an equally dark pandemic of opioid overdoses, which have risen sharply since March as the border closure and limited access to services raise fatal risks for drug users.

Jurisdictions across the country have reported an increase in overdose deaths tied to opioids, a stark reversal of the 13 per cent decline in fatal opioid overdoses between 2018 and 2019.

British Columbia saw more than 100 “illicit toxicity deaths” each month between March and August, with the death toll breaching 175 in May, June and July, according to numbers compiled by the Public Health Agency of Canada last month.

The 181 deaths in June were a 138 per cent increase from the 76 fatalities in the same period a year earlier.

The situation is no better in Ontario, where an estimated 50 to 80 people per week are dying of overdoses, according to the chief coroner's office.

The figures are up by 35 to 40 per cent year over year since the onset of the pandemic.

“Canadians should be seized with this particular crisis,” said chief public health officer Dr. Theresa Tam last month, given it is “escalating as we speak.”

The deadly spike is attributable to a range of factors linked to the virus, experts say.

“Since COVID, we've seen things get much worse. The level of adulteration of the drug supply has increased,” said Dr. Alexis Crabtree, a resident physician in public health and preventive medicine at the University of British Columbia.

Physical distancing at overdose prevention sites can result in bottlenecks, deterring users who need immediate access or who simply don't want to stand in line in the cold.

“Service providers where possible are going to online provision of service,” said Mark Haden, an adjunct professor at UBC's School of Population and Public Health.

“If you want to have a conversation with your doctor, Zoom is often the first choice. And homeless people don't have access to Zoom.”

“The more connection you have with people who care about you, the less likely you are to develop an addiction,” Haden said. “And right now we're disconnecting.”

Pandemic protocols at social housing facilities may restrict visitors, further increasing the risk of an overdose if no one is nearby to spot one in progress.

For some, the drastic action taken by governments across the country to combat COVID-19 offers an example of health-care responsiveness, but for users it drives home the seeming indifference of authorities to their plight, which far predates the pandemic.

“People have been very hurt by seeing how quickly the government can react to a public health emergency when it chooses to do so,” said Crabtree.

“People who use drugs and their allies have been really devastated to see that comparison.”

In the short term, experts are urging expanded access to prescribed opioids via safer-supply programs.

A study published in the Canadian Medical Association Journal in August showed that few overdoses involved people with prescribed opioids such as methadone and buprenorphine in their system, which Crabtree - the lead author - said should make doctors feel more comfortable prescribing them.

Another option is to declare the overdose crisis a public health emergency, a step that B.C. took in 2017, laying the groundwork for improved access to treatment and recovery services and broader use of overdose-reversing drugs such as naloxone.

It has also strengthened understanding of the epidemic through health surveillance, though more activists, allies and drug users themselves should be brought to the table, Crabtree said.

“They have knowledge that public health and policy-makers just don't have.”

On a larger scale, decriminalizing drugs could keep users from being driven underground and free up resources for public health that would otherwise go to law enforcement.

Provincial health officer Dr. Bonnie Henry has backed that notion. She called on the B.C. government to decriminalize possession of small amounts of drugs in a 2019 report, saying the province “cannot wait for action at the federal level.”

“Jail is crime school in the same way that Harvard Law is upper-crust training school â€¦ you learn some stuff, you're constantly told who you are, and you make connections.

“Ending drug prohibition would stop that process,” he said.