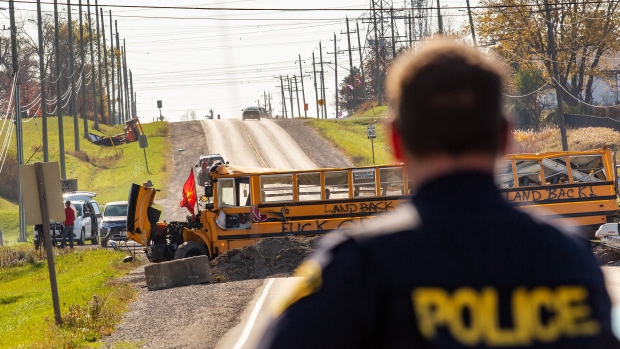 Ontario Provincial Police stand at a blockade on Argyle Street South in Caledonia, Ont., after a judge granted a permanent injunction against a land reclamation camp known as 1492 Land Back Lane Friday, October 23, 2020. THE CANADIAN PRESS/Tara Walton

The head of Ontario's provincial police force is defending his officers' conduct at the site of an Indigenous land dispute that escalated to violence last week.

Ontario Provincial Police Commissioner Thomas Carrique says on social media that protesters have "falsely blamed" the force for escalating the conflict in Caledonia, Ont.Demonstrators at the site of a proposed housing development say officers injured two people using a taser and rubber bullets last week, while officers allege a cruiser was damaged.

Carrique tweeted Sunday night that he is proud of what he calls officers' "measured response" to the situation.

He also shared a video that appears to be shot from within a police car showing two people striking the windshield with a lacrosse stick.

The occupants at the land reclamation camp known as 1492 Land Back Lane say Carrique's post is an out-of-context attempt to reframe the violence and further escalate tension.

The site has been occupied since July and demonstrators say the development near Six Nations of the Grand River First Nation is on unceded land and violates the sovereignty of the Haudenosaunee people.

A statement from 1492 Land Back Lane says blockades that have gone up since Thursday night were a protective measure against increased police presence.

It also says the police were asked to leave immediately before the video was shot.

"The actions of Land Defenders and community members, including erecting barricades, are a protective action meant to keep us safe from police violence," camp spokesperson Skyler Williams said in a statement.

"Police continue to threaten arrest and it's up to us to keep ourselves safe from these oppressive police tactics. Police have no place in dealing with land disputes."

Thirty-three people have been arrested since the occupation began and provincial police say 100 charges have been laid.

Carrique said in his Sunday evening social media post that arrests will continue.

"Extremely proud of my officers for their professional and measured response to keep the peace and preserve life while under attack. Arrests continue as members take responsible and sustained enforcement approach."

This report by The Canadian Press was first published Oct. 26, 2020.