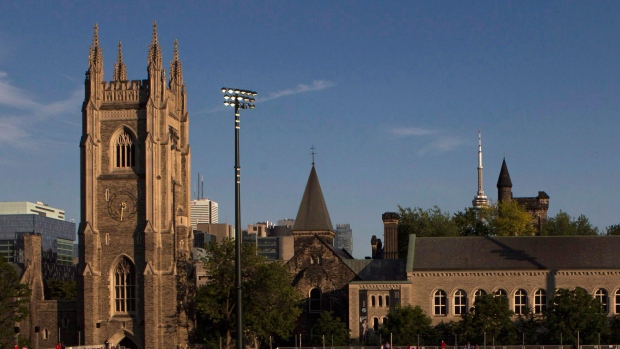 The organizer of a planned "nationalist rally" that has prompted widespread condemnation in the wake of violent clashes between white supremacists and counter-protestors in Virginia says he still plans go ahead with the event.

The page suggested the rally would be held on the University of Toronto’s campus on Sept. 14; however the school subsequently confirmed to CP24 that no such event is planned for the school.

The organizer, however, told CP24 on Tuesday that he still plans to host the event at a yet-to-be-determined location.

The Canadian Nationalist Party bill itself as a political party dedicated to “ending mass migration” and “reviving our national identity,” though the group is not officially recognized by Elections Canada.

In a 21-point manifesto posted to its website, the Canadian Nationalist Party demands an end to what it calls “the suppression of the founding Canadian people” and calls for the removal of references to multiculturalism from the Canadian Charter of Rights and Freedoms.

Speaking with CP24 on Tuesday, University of Toronto Student Union President Mathias Memmel said he believes the group is only interested in pursuing an agenda based in “white supremacy, racism and xenophobia.”

Memmel said that while there is no event actually booked for the University of Toronto campus, he is concerned that a group of people “could just wander on campus and start espousing hateful ideas.”

“It is my position that as a community we have a responsibility and a right to decide who gets a platform in these spaces and in this case these sort of hateful ideas and values do not have a place on this campus,” he said.

A spokesperson for the University of Toronto told CP24 on Tuesday that anyone who uses space on the campus for an organized event without a booking will be asked to leave.

The spokesperson also said that campus police work closely with Toronto Police and are always in position to respond to any safety concerns.

Some students, nonetheless, told CP24 that they remain concerned about the reported event, especially in light of what happened in Virginia.

“If they are courageous enough to come out here and say anti-Semitic, racist and misogynistic crap, let’s outnumber and humiliate them,” Umit Aydogmus said earlier in the day.

The organizer of the event, Travis Patron, told CP24 that it is incorrect to label him a white supremacist, as he is only someone who doesn’t believe in multiculturalism.