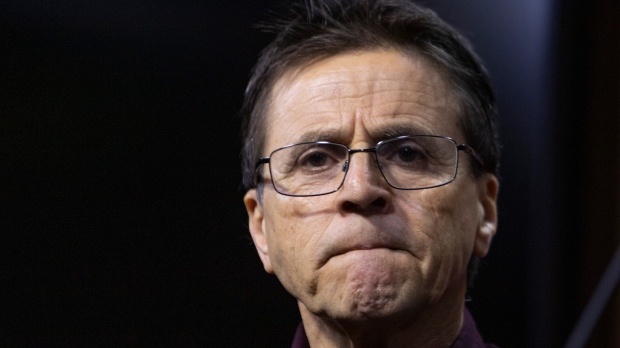 Hassan Diab holds a news conference on Parliament Hill, in Ottawa Friday, February 7 , 2020. Diab is seeking compensation from the federal government of Canada over his extradition to France on allegations of terrorism. THE CANADIAN PRESS/Fred Chartrand

OTTAWA - A French court has upheld a decision directing Ottawa sociology professor Hassan Diab to stand trial in the decades-old bombing of a Paris synagogue.

Diab's lawyer, Donald Bayne, called the Cour de Cassation's ruling inexplicable and said he is considering an appeal to the European Court of Human Rights.

“The travesty of justice continues despite clear evidence of Hassan's innocence,” he said minutes after the ruling Wednesday.

“This shows how political pressure trumps justice. We call upon PM Trudeau to put an end to this miscarriage of justice.”

Born in Lebanon, Diab became a Canadian citizen in 1993, working in Ottawa as a university teacher.

The RCMP arrested him in November 2008 in response to a request by France. French authorities suspected Diab was involved in the 1980 bombing of a Paris synagogue that killed four people and injured dozens of others, an accusation he has always denied.

After drawn-out proceedings that went all the way to the Supreme Court of Canada, Diab was extradited to France, where he spent three years behind bars, including time in solitary confinement.

In January 2018, French judges dismissed the allegations against him for lack of evidence and ordered his immediate release.

The ruling allowed Diab, now 67, to return to his wife and young children in Ottawa while subsequent court proceedings in Paris played out.

Diab's supporters have long argued he was in Beirut - not Paris - when the attack took place and that his fingerprints, palm prints, physical description and age did not match those of the suspect identified in 1980.

Bayne has said the latest analysis of handwriting evidence in the case makes the argument for pursuing Diab even weaker.

The statement of claim contends the government withheld crucial fingerprint evidence before his extradition hearing, which Diab says affected the outcome.

An external review of Diab's extradition case for the Canadian government concluded that federal lawyers who worked on the file “acted in a manner that was ethical and consistent” with law and policy.

Diab has rejected the report as a “whitewash exercise.”

Amnesty International Canada and the British Columbia Civil Liberties Association are among the many groups that have called for a public inquiry into the Diab case and a review of Canada's extradition system.